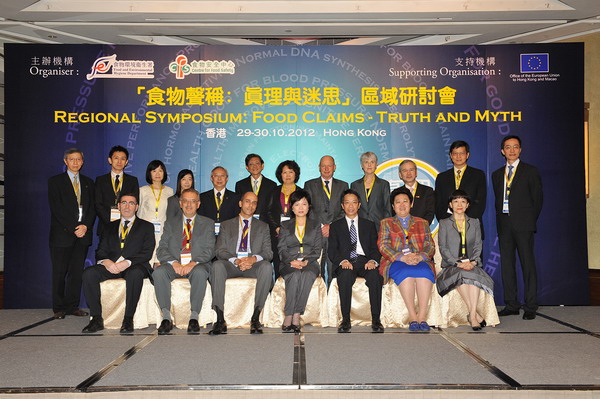 Picture above: Mrs Marion LAI (in the middle), the Permanent Secretary for Food and Health (Food) and Mr Clement LEUNG, the Director of Food and Environmental Hygiene take a group photo with other government officials and the guest speakers.

Claims made about the nature, contents and functions of food in relation to their nutrition and health effects have been widely used in various forms in the food world. Some people consider them useful for highlighting to the potential consumers the contents and functions of the food, while others are skeptical about any possible exaggeration or even misleading comments made for the mere purpose of boosting sales. A balance between protection of consumer health and promotion of fair practice in international food trade seems to be crucial.

In this connection, the Centre for Food Safety (CFS) organised the Regional Symposium "Food Claims: Truth and Myth" in the Hotel Nikko Hongkong at Tsim Sha Tsui East, Kowloon on 29 and 30 October 2012. The Symposium gathered experts on food science, academics, food traders including the research and development personnel, consumers, and those from food regulatory authorities to examine the current development of nutrition and health claims, explore the market and scientific research directions, and exchange views on various regulatory approaches.

[Pictures: Participants attentively listen to the speakers and actively take part in the discussion sessions to exchange views. ] 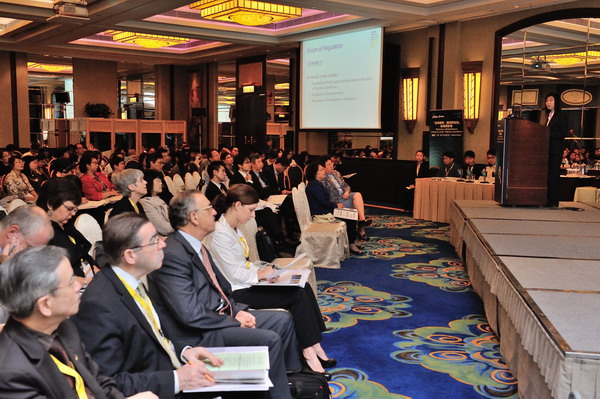 [ Picture above: Participants listen intently to the speaker. ] 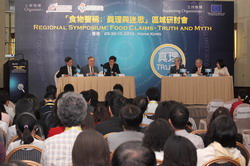 The Symposium was a huge success, attracting over 400 participants, including representatives from Government departments and the Mainland and overseas authorities, members of the food trade, medical practitioners, nutritionists, academics and students. The Symposium was well received with positive feedback. Most of the participants found the Symposium useful in building bridges and forging closer links between the parties concerned, which were important for the protection of public health.

[Picture on the right: Speakers engage in interactive discussions with the participants] 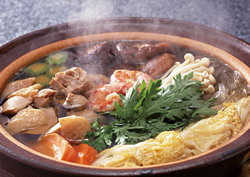 GBL is a chemical which can be used as a food flavouring agent and as a solvent for removing rust or superglue. It may also be used for producing other chemical products. As it is a substance possessing psychoactive characteristics, GBL is liable to abuse.

According to relevant literature, GBL can be quickly converted into gamma-hydroxybutyric acid (GHB) (commonly known as "Rape Water"), a dangerous drug already specified in the First Schedule to the Ordinance, inside the human body. The Department of Health advised that GBL does not have any known pharmaceutical use, and that the consumption of GBL could cause adverse effects similar or even identical to those of GHB, such as vomiting, hypotonia, tremors, seizures, aggression, impairment of judgment, coma, respiratory depression, hypothermia and bradycardia.

In view of this, under the amendments to the Ordinance, GBL has been specifically listed as a dangerous drug. Besides, an exemption provision has been included to allow the use of GBL at a level reasonably safe for human consumption. The relevant clause provides for exemption in respect of a preparation of GBL containing not more than 0.1% of GBL, being a preparation compounded with one or more other ingredients in such a way that the preparation has no, or a negligible, risk of abuse and that the GBL cannot be recovered by readily applicable means or in a yield which would constitute a risk to health.

For more information on the provisions under the Ordinance, please visit the Bilingual Laws Information System (BLIS) at https://www.elegislation.gov.hk/?_lang=en

According to the Centre for Health Protection, the number of Listeria monocytogenes infections reported annually in Hong Kong between 2004 and 2011 ranged from 3 to 17. Nonetheless, there were already 21 reported infections in January to August 2012, hitting a record high since the disease was listed as a statutory notifiable infectious disease in 2008. High-risk individuals should pay special attention to food hygiene so as to prevent being infected with Listeria monocytogenes. 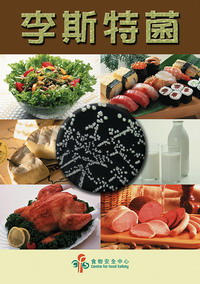 Listeria monocytogenes is a pathogenic bacterium. It is universally found in the environment, particularly in soil, vegetation, animal feed, and in human and animal faeces. Such bacterium can survive and multiply at temperature as low as 0°C, but can be easily destroyed under normal cooking temperature.

Consuming Listeria contaminated food may lead to the development of a disease called listeriosis. Although infections in healthy people are mostly asymptomatic, foodborne listeriosis is a relatively rare but serious disease with high fatality rates (20% - 30%) to the groups at risk, i.e. pregnant women, newborns, the elderly and immunocompromised individuals such as patients with AIDS, diabetes mellitus, cancer or kidney disease. Symptoms usually appear within 3 to 70 days (estimated median incubation period is three weeks) after consuming contaminated food, which include flu-like illness, nausea, vomiting, abdominal cramps, diarrhoea, headache, constipation and persistent fever. Serious infections of Listeria monocytogenes are manifested by septicaemia and meningitis.

Prevention of Listeria infections is of major concern in pregnant women. Even though symptoms may be relatively mild in mothers, the passage of Listeria monocytogenes through the placenta may cause miscarriage, stillbirth or perinatal septicaemia and meningitis in the newborns.

Advice to the Trade :

Long ago, humans learned to apply the techniques of cross breeding in order to produce plants and animals with desirable characteristics (e.g. high yield and better adaptation to the growth environment). With the development of science and technology, the conventional approach of cross breeding, which is more time-consuming, is no longer the only way of modifying foods. We are now turning to biotechnology in selecting and modifying genes, by which species with the desired characteristics can be obtained in a faster manner.

A gene is a unit of hereditary material which is made up of deoxyribonucleic acid (DNA). It carries the required information necessary for protein(s) synthesis in a cell, which determines the characteristics of an organism. By modifying genes in plants or animals, we can change the characteristics of the organisms. With modern biotechnology, we are now able to transfer genes between different species and specifically modify the genetic make-up of different organisms in a faster and more precise manner, so as to obtain species with certain characteristics. Genetically modified (GM) organisms can be applied directly for food use (e.g. GM tomato) or to produce products used as food additives or processing aids (e.g. aspartame, an artificial sweetener used in soft drinks, which is produced by GM bacteria).

The research and development of GM food is not only targeted at the reduction of production cost, increased yield, enhanced pest resistance for crops and minimised pesticide usage in crop cultivation, but also production of crops with enhanced nutritional content and improved flavour and texture. It can even help to remove certain potential allergens from crops.

While the use of genetic engineering may provide us with food of better quality, the potential risks associated with GM foods/crops have always been the cause of concerns of green groups and consumer groups over the followings:

For the sake of putting the potential risks of GM food under control, national authorities of GM food producing countries have put in place safety assessment schemes. Such a move helps to ensure that newly developed GM organisms, before available on the market, have passed the safety assessment and hence, would not pose health threats to human and are suitable for human consumption. 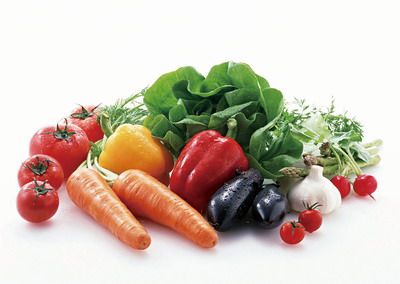 For the sake of putting the potential risks of GM food under control, national authorities of GM food producing countries have put in place safety assessment schemes. Such a move helps to ensure that newly developed GM organisms, before available on the market, have passed the safety assessment and hence, would not pose health threats to human and are suitable for human consumption.

* Modify the product formulation to reduce the trans fats content in foods.

* Prepare foods with low fat cooking methods (such as steaming, grilling and baking). 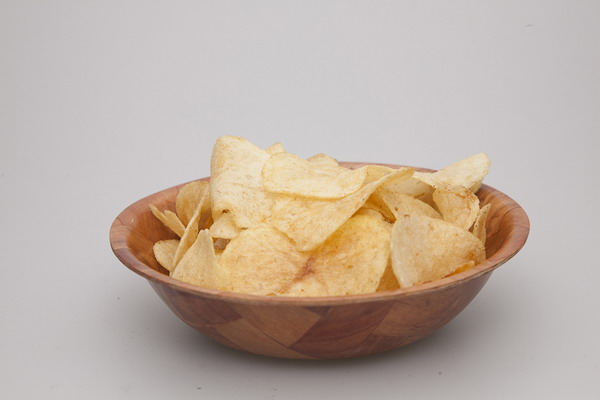 So Tender and Appetising: Fried Fish with Sweet and Sour Sauce 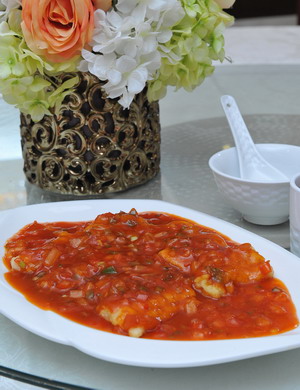 A sweet and sour sauce made with green peppers, tomatoes, pineapples etc goes perfectly well with fried fish. The "Fried Fish with Sweet and Sour Sauce" is a delicious dish featuring succulent fish fillets with a crispy coating and an appetising sauce. In this issue, it is our honour to have invited Mr HO Po-lung, head chef of Super Star Seafood Restaurant, to demonstrate how to prepare the dish. Super Star Seafood Restaurant is a signatory of the Food Safety Charter.

[Picture on the right: Fried Fish with Sweet and Sour Sauce, succulent fish fillets with a crispy coating.] 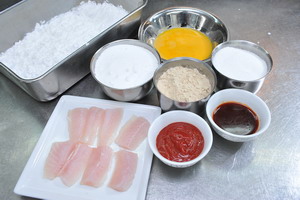 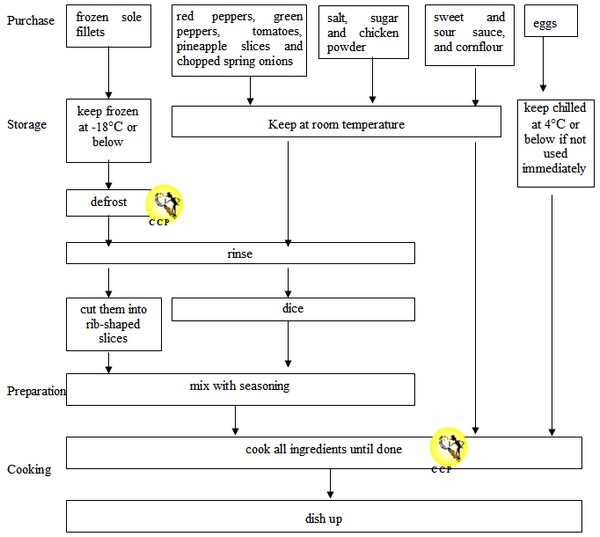 Q: Is wrapping fresh vegetables directly with newspaper before storing them in refrigerator the best way to keep them fresh?

A: Many people wrap fresh vegetables with newspaper before storing them in refrigerator, believing that vegetables can thus be preserved longer. As we all know, printing ink comes off easily from newspapers and it often stains our hands after reading newspapers. Printing ink for newspapers is complicated in composition. Apart from pigments, various industrial organic solvents may be used in its manufacturing process. It may also contain heavy metals such as lead and cadmium. Printing ink may transfer to the surface of the vegetables if they are wrapped with newspaper and may not be easily detected by naked eyes. Prolonged exposure to these chemicals may pose potential risks to human health. As such, wrapping vegetables with newspaper is not a wise way to keep them "fresh".

All cooked foods should be consumed as soon as possible. For those not for immediate consumption, they should be kept at above 60°C before serving. When reheating foods, make sure that the core temperature reaches at least 75°C. To prevent bacterial growth, leftovers should be stored in refrigerator within 2 hours to keep them at 4°C or below. Leftovers should not be stored in refrigerator for more than 3 days and should not be reheated more than once. Discard foods that perish, stink or go mouldy due to possible prolonged or improper storage.

To strengthen collaboration with the food trade and enhance food safety, the CFS regularly conducts Trade Consultation Forum. The Forum provides a platform for the CFS to exchange views on food safety matters with the trade and to collect their views and comments on food safety control measures as well as risk communication activities. The first forum was held on 28 July 2006. Since then, 37 forums have been held with active participation of various food trade associations, food processors, food importers and wholesalers, supermarket operators and retailers. If members of the trade wish to attend the forum, please visit the CFS website for details.

For any enquiries, please contact our Communication Resource Unit on 2381 6096.

To enhance the awareness and knowledge of the trade on food hygiene and safety, the CFS plans to assign experienced health inspectors of its Communication Resource Unit to deliver hygiene talks on various topics in 2013. The talks, with the target audience being employees of the food business in various districts, will be conducted in Cantonese and the duration of each talk will be about 2 hours. Leaflets and souvenirs promoting "Food Safety" messages will be given out during the talks. New arrangements of the talks will be announced regularly and members of the trade are welcome to visit the CFS website.

For any enquiries, please contact our Communication Resource Unit on 2381 6096.

Printed copies of the Food Safety Express can be collected at the Communication Resource Unit located at 8/F, Fa Yuen Street Municipal Services Building, 123A Fa Yuen Street, Mong Kok, Kowloon. For enquiry, please call 2381 6096. The public may also visit the website of the Centre for Food Safety ( http://www.cfs.gov.hk) for the online version.