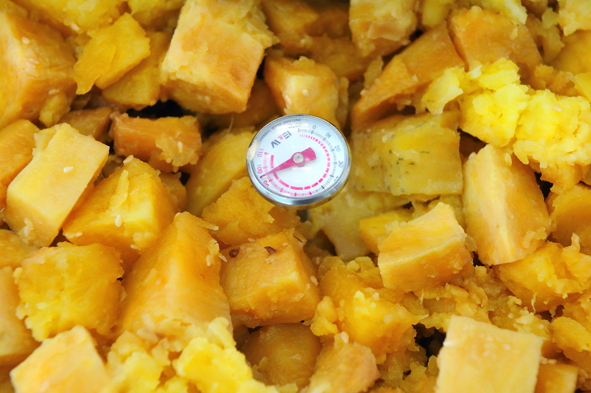 Food safety involves many important factors, one of which is food temperature, including the temperature at which food is cooked and stored. According to the statistics for 2011, the number of restaurant-related food poisoning incidents totalled 290, of which 31 were attributed to the storage of food at inappropriate temperatures.

An effective way to ensure food safety is to adopt a proper cooking process to kill the bacteria in food with high temperatures. During the cooking process, the core temperature must reach at least 75°C or above for 30 seconds until the food is thoroughly cooked.

Food prepared should preferably be consumed immediately. Otherwise, it must be kept hot or kept cold at an appropriate temperature. For example, hot food must be steamed over hot water in a covered wok, whilst cold food and cold dishes like sushi and sashimi must be refrigerated.

During transportation, food should be placed in a cooler with a cold source such as ice or frozen gel packs, or in a heat-generating insulated container to maintain the temperature of the food. 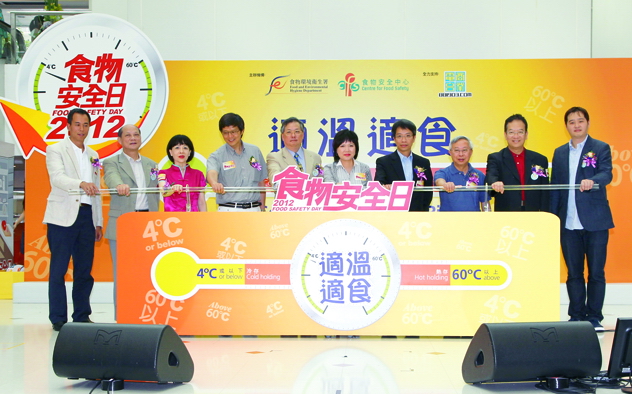 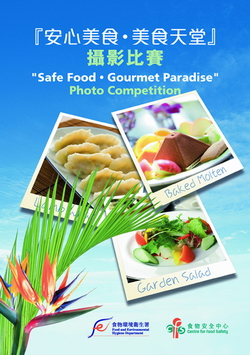 Among other food safety publicity drives, the CFS held the "Food Safety Day 2012" on 26 May 2012 to promote preparing and keeping food at the right temperature. A photo competition was launched to showcase Hong Kong through the lens under the theme "Safe Food‧Gourmet Paradise". 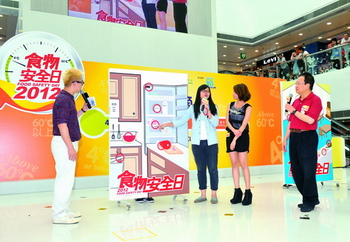 A series of talks on food safety are also be organised for the public between May and August 2012, covering getting the temperature right, nutrition labelling, keeping foreign bodies away from food, as well as food incidents and risk perception.

HEV is primarily transmitted via the faecal-oral route. In some major outbreaks which happened in the past, contaminated water or food was implicated. Hepatitis E is common in developing countries where environmental sanitation is poor, but it is rare in developed countries. While previously it occurred mostly in travellers returning from endemic areas, cases not related to travel are on the increase in developed countries. It is suspected that these cases were caused by the consumption of inadequately cooked food such as shellfish and pig offal, which are, as documented, possible food sources of HEV.

Comparing to vegetative bacteria, foodborne viruses are generally more resistant to heat. In addition, persistence of the viruses may be different in different food substrates. Heat treatment usually recommended (i.e. cooking to an internal temperature of 75°C for 30 seconds) to ensure food safety may not be adequate for some virus-food combinations. More stringent time and temperature combinations are required.

For taste, texture and other sensory reasons, inadequately cooked pig livers are preferred by some consumers. However, to prevent hepatitis E, food handlers and consumers should cook pig livers thoroughly, especially during hotpot or congee cooking. For sliced pig livers, depending on thickness and quantity, boil at 100°C or stir-fry in hot skillet/wok for at least three to five minutes. Heating to a core temperature of 90°C for 90 seconds is required for cooking of molluscan shellfish; hence, boil at 100°C until their shells open and boil for a further three to five minutes afterwards. In addition, food handlers and consumers are also advised to observe good personal and food hygiene practices. Restaurants should make sure the cooked food is fully done, and this is particularly important when cooking for customers from high risk populations. 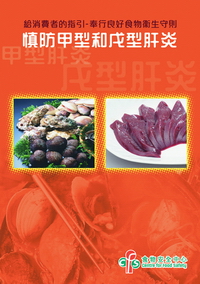 Slice raw meat and offal into thin strips to allow thorough cooking, especially those for hotpot or congee cooking.

The Findings of the Total Diet Study – Inorganic Arsenic in Foods

Arsenic is a metalloid that occurs in inorganic and organic forms, which are found in the environment from both natural sources and human activities. Low levels of inorganic arsenic in foods may be unavoidable due to its ubiquitous nature in the modern industrial world. Food is recognised as the major source of inorganic arsenic exposure. In general, inorganic forms of arsenic are more toxic to humans than organic ones while the trivalent form (arsenite) is more toxic than the pentavalent form (arsenate). The main adverse effects in human after long-term ingestion of inorganic arsenic are cancer, skin lesions, cardiovascular disease, neurotoxicity and diabetes.

In 2010, the Joint Food and Agriculture Organization / World Health Organization Expert Committee on Food Additives (JECFA) determined the inorganic arsenic benchmark dose lower confidence limit for a 0.5% increased incidence of lung cancer in human (BMDL0.5) which computed to be 3.0 μg/kg body weight (bw) /day. In other words, at a daily exposure to inorganic arsenic of 3.0 μg/kg bw, the conservative estimate of the increase of lung cancer incidence in the population would be 0.5%. In fact, the BMDL cannot be regarded as a safety reference value, in which exposure level below this point does not mean there is no health risk. Furthermore, the margins of exposure (MOEs) are also calculated by taking relative cancer potency and exposure estimates into account to provide an indication of the level of health concern without actually quantifying the risk (i.e. the lower the MOE, the greater the health concern, and vice versa). MOEs can be used for priority setting for risk management actions.

From March 2010 to February 2011, a total of 1 800 individual samples were taken on four occasions. They composed of 150 different foods with 3 purchases collected on each of the four occasions. These individual samples were then processed into 600 composite samples for inorganic arsenic test. The test showed that about half of the composite samples (51%) were detected with inorganic arsenic (Limits of detection were 3 and 1.5 μg/kg in food and water respectively).

At food item level, water spinach was found to contain the highest level (mean: 74 μg/kg, ranged from 35 to 120 μg/kg), followed by salted egg (mean: 58 μg/kg) and oyster (mean: 58 μg/kg), whereas no water sample from our study has been detected with inorganic arsenic.

Rice is the major contributor of the dietary exposure to inorganic arsenic, in which the cooked white rice alone accounted for 45.2% of total exposure. This was consistent with the data reported in other countries where rice is the staple food.

The food trade is advised to observe good agricultural practices to minimise inorganic arsenic contamination of foods, such as avoid using arsenic contaminated water for irrigation. The findings of the current study are not sufficient to warrant changes in basic dietary advice on healthy eating, i.e. have a balanced and varied diet, and take cereals, such as rice, noodles, oatmeal and bread, as the major dietary source. Those individuals, who wish to reduce the exposure to inorganic arsenic, can consider choosing more other cereals, which generally contain lower levels of inorganic arsenic than rice, as part of their diet. In addition, they can wash rice thoroughly but without excessive washing as some nutrients may be lost, and discard the washed water before cooking so as to reduce the arsenic levels, especially the inorganic form. 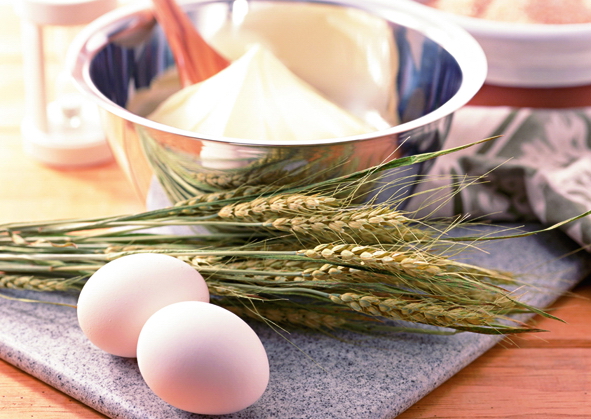 Unfounded messages about food safety are in circulation from time to time. Among them, people are saying that canola oil is associated with mustard gas, bovine spongiform encephalopathy (BSE, also known as Mad Cow Disease) or fatty degeneration in organs such as heart and kidneys.

Misinformation about the safety of canola oil may arise from the erroneous belief that it is the same as rapeseed oil. In fact, canola oil is made from the plant developed from natural cross breeding of the rapeseed plant with unwanted traits removed.

Canola oil is low in saturated fat and has high proportion of unsaturated fat. It is safe for consumption as part of a balanced diet.

Tips on "Getting the Temperature Right"

Be mindful of what you eat, "Eat Cooked Food Only"

Undercooked foods contain lots of bacteria. How can you put them in your mouth? When cooked meat and poultry are cut, juices should be clear and not be pink. As for eggs, the yolks should be firm. Soup should be kept boiling for at least one minute before serving. Keep in mind the above tips to ensure safe food consumption!

The CFS will hold a Regional Symposium on Food Claims: Truth and Myth on 29 and 30 October 2012. The Symposium aims at allowing participants (including experts from Hong Kong, Mainland China and other countries) to exchange views on the latest developments of food safety in various regions, fostering collaborations among the trade and providing a platform for communication and trading relating to food.

All food traders are welcome. For details, such as the venues of the Symposium, please visit the CFS website (http://www.cfs.gov.hk) .

The endless variety of international cuisine in Hong Kong has made the city an undisputed Gourmet Paradise. In this issue of News on New Dishes, we will go beyond the Asian borders and introduce a dish rich in Mediterranean flavours – Linguine with King Prawns and Sea Scallops in Saffron Juice. Chef Gary Wong of Hotel Nikko Hongkong has demonstrated to us how to prepare this Mediterranean dish. 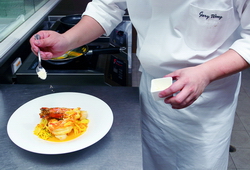 Hotel Nikko Hongkong is committed to ensuring food safety and has become a signatory of the Food Safety Charter for three consecutive years since 2009. It has fulfilled its mission as a signatory and joined hands with the Government to promote food safety to the public.

Linguine with King Prawns and Sea Scallops in Saffron Juice It is a step or procedure in a food manufacture process at which control can be applied and as a result, food safety hazard can be prevented or eliminated.

There are two Critical Control Points in the production of Linguine with King Prawns and Sea Scallops in Saffron Juice: 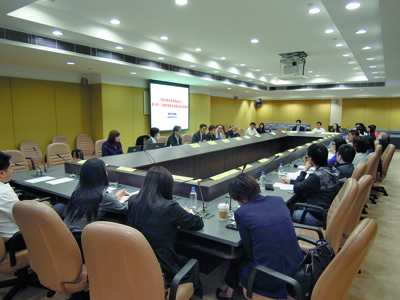 The proposed microbiological criteria for food are divided into three chapters:

To solicit the views of the trade on the proposed criteria, the CFS held the first technical meeting on 18 April 2012, inviting representatives from the food trade and laboratories as well as other stakeholders. There was enthusiastic discussion at the meeting and the CFS gauged valuable opinions. The CFS would like to express its gratitude to all the attendants of the meeting.

Question: Should eggs be washed before being stored in refrigerators?

Does the symbol found on the bottom of a plastic water bottle mean the bottle can be recycled for use once?

The food items on the right are easily contaminated by the germs on the left, leading to food poisoning. Please link them together: