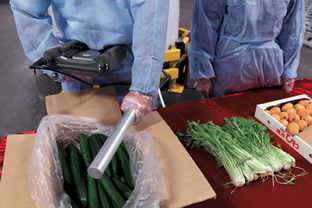 On 11 March 2011 , a severe earthquake hit the east coast of the Miyagi prefecture of Japan which caused a devastating tsunami inflicting heavy casualties and massive destruction. The earthquake and tsunami damaged the cooling system of four reactors at the Fukushima Daiichi Nuclear Power Plant resulting in release of radioactive substances in the atmosphere and surrounding environment. The radioactive substances not only contaminated the surroundings but also the food produced in some areas of Japan . 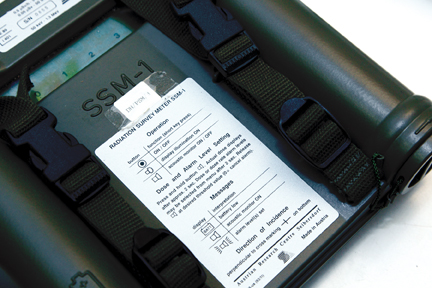 In view of the nuclear incident in Fukushima , the Centre for Food Safety (CFS) has stepped up surveillance at import level on food products from Japan , such as vegetables, fruits, milk, meat and aquatic products for radiological testing since 12 March 2011 . Samples of Japanese food were also taken at retail level for testing of radiation levels to ensure that food imported from Japan was safe for consumption. 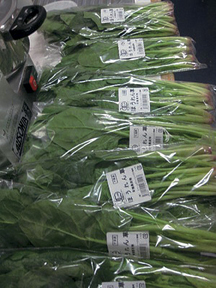 Food products imported from Japan make up a low market share in Hong Kong, from less than 1% (e.g. vegetables and fruits) to about 5 % (e.g. meat, milk and frozen confections). As of August 2011, the CFS found that three samples of vegetables, including a spinach sample, a white radish sample and a turnip sample, imported from Chiba prefecture of Japan were detected to contain iodine-131 with a level exceeding the standards laid down by the Codex Alimentarius Commission (Codex) in the Guideline Levels for Radionuclides in Foods Contaminated following a Nuclear or Radiological Emergency (Guideline Levels). Based on risk assessment, the radiation dose for consumption of the consignment of contaminated foods for a year is equivalent to two-thirds to ten chest X-rays. Although consumption of the food would not pose immediate health risks, the CFS decided to impose import suspension for the sake of public health and food safety. The Director of Food and Environmental Hygiene (DFEH) made an order under section 78B of the Public Health and Municipal Services Ordinance (Cap.132) (the Order) to prohibit the import and also the supply or sale within Hong Kong with effect from noon on 24 March 2011 of food products which are/were harvested, manufactured, processed or packed from five prefectures of Japan, i.e. Fukushima, Ibaraki, Tochigi, Gunma and Chiba. Chilled or frozen game, meat and poultry, poultry eggs, and live, chilled or frozen aquatic products accompanied by a certificate issued by the competent authority of Japan certifying that the radiation levels do not exceed the standards laid down in the Guideline Levels can be exempted. The above foods which exceeded the standards laid down in the Guideline Levels were disposed of and did not enter the local market. 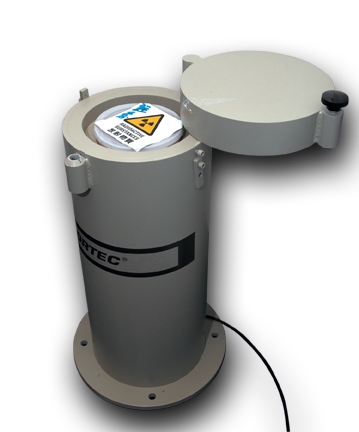 Equipment used by the CFS for testing radiation levels of food

Since the nuclear incident in Fukushima, the CFS has stepped up radiological testing of food products imported from Japan to ensure that the foods are free from radioactive contamination. As of 12 August 2011, a total of 38 693 food samples had been tested. The results were uploaded onto the following web site for reference by the public:

Furthermore, the CFS has kept close communication with the food traders, Japan authorities and the International Food Safety Authorities Network (INFOSAN) of the Food and Agriculture Organisation of the United Nations to secure the most updated information. The CFS will continue to strengthen food surveillance at both import and retail levels for food imported from Japan and closely monitor the situation.

The CFS has in place a routine food surveillance programme to ensure that all food products available on the local market are safe for consumption. In testing the radiation levels of food products, screening is first conducted by hand-held survey meter on the whole consignment, then with samples taken for examination by the Contamination Monitoring System (CMS) . Samples with a level exceeding the standards laid down in the Guideline Levels will be sent to Government Laboratory for further quantitative analysis of radionuclides (including iodine-131, caesium-134 and caesium-137).

The CFS currently adopts the standards laid down by Codex in the Guideline Levels in testing the radiation levels of food. According to Codex, when radionuclide levels in food do not exceed the standards laid down in the Guideline Levels, the food should be considered as safe for human consumption. If a consignment of food is tested to have exceeded the standards, the CFS will immediately mark and seal that consignment and arrange for disposal.

The CFS has published guidelines for reference by the trade

The Food and Drugs (Composition and Labelling)(Amendment: Requirements for Nutrition Labelling and Nutrition Claim) Regulation 2008 (the Amendment Regulation) came into effect in July 2010. Under the Amendment Regulation, all prepackaged foods are required to carry a nutrition label listing the contents of energy and the seven specified nutrients. Recently, the CFS in collaboration with the food trade has prepared the Trade Guidelines on Serving Size of Prepackaged Food for Nutrition Labelling which sets out the principles for determining serving size for different kinds of food. The Guidelines aims at encouraging and assisting the trade to provide information on the serving size of prepackaged food for the purpose of nutrition labelling according to good practice so as to facilitate consumers in understanding the nutrient content of the food product and making healthy food choices. 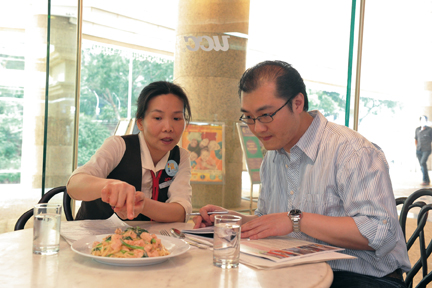 Ms NG, the Senior Chef of UCC, gives an interview to the CFS

To continue with News on New Dishes in the last issue, this time we interviewed UCC, another Signatory of the Food Safety Charter. One of UCC's very popular dishes is "Spaghetti with Salmon and Spinach in White Sauce". What are the tips for cooking this dish?

Ms Debbie NG, the Senior Chef of UCC, told us that it is a prepared-when-ordered dish and the tips for cooking it are as follows:

Finally, in order to let its customers eat at ease, Ms NG said that UCC would continue to uphold the Food Safety Charter, practise the Five Keys to Food Safety and encourage its staff to attend food safety seminars organised by the CFS for the trade. 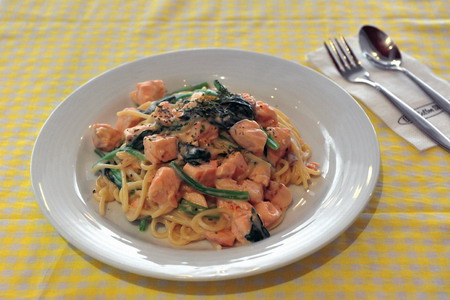 Freshly prepared " Spaghetti with Salmon and Spinach in White Sauce"

Thanks to the active participation of the local food trade and the public recognition of the "Food Safety Charter" (the Charter), the Charter has just entered the third year smoothly.

The Charter Annual Meeting was held at the Assembly Hall, YMCA of Hong Kong on 24 February 2011 to enhance contact and promote exchange among the signatories. At the meeting, Dr Constance Chan, Controller of the Centre for Food Safety delivered the opening speech, while staff of the CFS gave a briefing on the Food Safety Bill and the record-keeping requirement. A number of experienced trade representatives also shared their knowledge about food purchasing, the principles of hazard analysis and critical control point under ISO 22000 as well as its certification. Lastly, trade representatives exchanged views on food safety promotion at the discussion session.

Through the Charter, the CFS hopes to promote the "Five Keys to Food Safety" among the food premises to enhance food safety. This year, the Charter has in place a recognition scheme for food trade associations and licensed food premises that sign up to the Charter for three consecutive years. Signatories can be identified by means of the certificate and sticker of the Charter displayed on the premises.

A total of 21 food trade associations and over 2 000 licensed restaurants, food establishments, supermarkets and convenience stores signed up to the Charter this year. Information on the signatories is available at both the CFS web site ( www.cfs.gov.hk) and the roving exhibitions held in various districts.

Since its establishment on 2 May 2006 , the Centre for Food Safety (CFS) has adopted a food safety risk analysis framework promulgated by international food safety authorities. With the challenges from globalisation of food supply, the CFS has been working over the past five years to enhance surveillance of both local and imported food, respond proactively to food incidents, and implement a number of initiatives to improve its work in various areas of food safety control. In October 2010, the CFS was designated the World Health Organization Collaborating Centre (WHOCC) for Risk Analysis of Chemicals in Food.

To commemorate this landmark development and the fifth anniversary of the establishment, the CFS hosted a Regional Symposium featuring the theme "From Food Incidents to Crisis Management" at Hotel Nikko Hongkong, Tsim Sha Tsui East, Kowloon on 1 and 2 June 2011 . The objectives of the Symposium are to provide a platform for experience sharing, updating on food safety issues, fostering partnership and collaboration, and providing an opportunity for communicating with the trade.

The officiating guests included Dr York CHOW, Secretary for Food and Health, and Ms Jenny BISHOP, Technical Officer in Food Safety of the World Health Organization Western Pacific Regional Office. They joined Mr Clement LEUNG, J.P., Director of Food and Environmental Hygiene and Dr Constance CHAN, Controller of the CFS, in launching the light-up ceremony, formally kicking off the Regional Symposium. Ms Jenny BISHOP, on behalf of the World Health Organization, congratulated the CFS on the fifth anniversary of its establishment and on its designation as the World Health Organization Collaborating Centre for Risk Analysis of Chemicals in Food. She also talked at the Symposium about how the International Food Safety Authorities Network (INFOSAN) works. 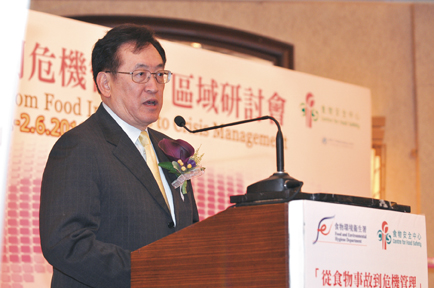 Secretary York CHOW delivers a speech at the opening ceremony 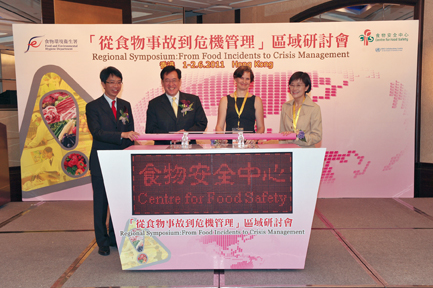 (From left) Mr Clement LEUNG, Director of Food and Environmental Hygiene; Dr York CHOW, Secretary for Food and Health; Ms Jenny BISHOP, representative of the World Health Organization and Dr Constance CHAN, Controller of the Centre for Food Safety launch the light-up ceremony to formally kick off the Regional Symposium 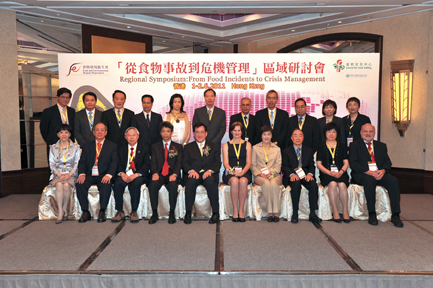 The Symposium, composed of plenary and parallel sessions, aimed to explore various topics of food incidents and crisis management from different aspects. The topics included Dealing with Food Emergencies, Chemical Food Incidents and Risk Communication, A Risk-based Approach to Food Incidents, Preparing for Future Challenges, etc. In view of an emergency happened in Japan before the Symposium, a Japanese speaker was invited timely to give a presentation on Food Safety Responses to Fukishima Nuclear Plant Incident in Japan. In this one and a half day Symposium, participants actively took part in different sessions to exchange views and share experience, fulfilling the objective of enhanced communication among the interested parties. 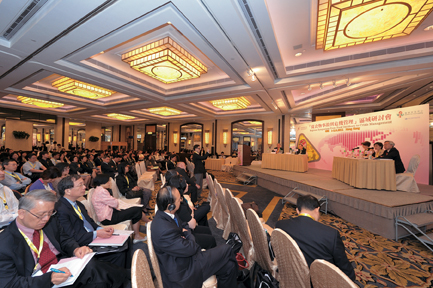 The Food Safety Ordinance (the Ordinance) came into effect on 1 August 2011 . The Ordinance requires food importers and distributors to register with the Director of the Food and Environmental Hygiene Department. It also requires all food importers, distributors and retailers to keep records of transactions of the food business. There is a six-month grace period, ending on 31 January 2012 , for compliance with the two requirements.

To facilitate the food trade's understanding of the contents and the requirements of the new Ordinance, a series of briefing sessions have been arranged to take place from June 2011 to January 2012. Members of the trade are welcome to attend these briefing sessions . Those interested should download the reply slip from the web site of the Ordinance ( www.foodsafetyord.gov.hk). The c ompleted forms can be returned to the CFS by facsimile (fax number: 2893 3547 ) or mail (address: Risk Communication Section, 43/F, Queensway Government Offices, 66 Queensway, Hong Kong ). For enquiries, please call 2867 5147.

The CFS regularly holds exhibitions at various public housing estates and major shopping centres. Exhibition panels on different topics such as food safety and nutrition labelling are displayed and educational videos are shown to enhance public knowledge of food safety. There are also games at the venues. Participants of the games will receive a souvenir. For details of the roving exhibitions, please visit the CFS web site (www.cfs.gov.hk) or contact the Communication Resource Unit on 2381 6096. 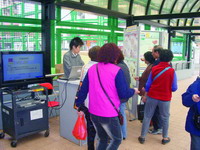