Speaking at the opening of the Meeting, the then Secretary for Health, Welfare and Food, Dr York Chow, pointed out that Guangdong, Shenzhen, Zhuhai, Macau and Hong Kong were close neighbours with heavy volume of passenger and freight flow between these places. With further regional economic development, the health, inspection and quarantine authorities in the Mainland, Macau and Hong Kong had to further strengthen cooperation on this front. He expected that through exchange among experts, the technical standard of health, animal and plant quarantine and food safety could be raised to facilitate the implementation of health and food safety regulatory measures and further refinement of the existing co-operation mechanism and information exchange. 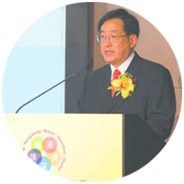 Topics of discussion in the Meeting included inspection and quarantine on health, fruits and vegetables, aquatic products, plants, animal and food livestock as well as the management of food safety of poultry eggs, laboratory standard and technology. 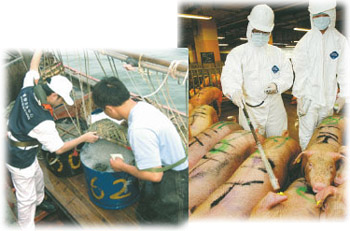 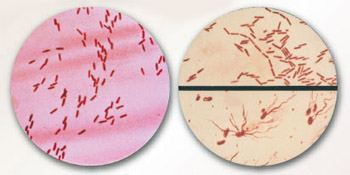 According to the Codex Alimentarius Commission, an international food standard setting authority, the functions of microbiological guidelines include setting of the design requirements of food premises, indication of the required and expected microbiological status of food commodities, and verification of the efficacy of the hygienic practices adopted.

In 2002, the Food and Environmental Hygiene Department, upon the advice of the Expert Panel on Microbiological Safety of Food, developed the Microbiological Guidelines for Ready-to-eat Food (the Guidelines). The Guidelines stipulate the safety limits of nine major food borne pathogens such as Salmonella species, Listeria monocytogenes, E. coli O157 and Vibrio cholerae, and provide a classification of the microbiological quality of ready-to-eat food to reflect the hygienic status of the food concerned. 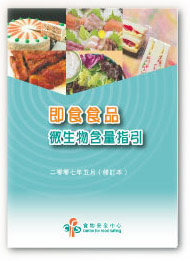 In light of changing needs and with reference to the latest expert views, the Centre for Food Safety (CFS) revised the Guidelines in 2007. The revision mainly involves textual amendments and update of the microbiological limits for Listeria monocytogenes according to international practices and risk assessment results.

With the microbiological limits of ready-to-eat food explicitly set, the food trade can draw up relevant food safety control plans and focus on the implementation of priority control measures. The Guidelines can also assist regulatory authorities to monitor and control food safety.

Cooperation among the food trade, the public and the government is essential in ensuring food safety. With better knowledge on the microbiological safety of ready-to-eat food, the trade can further enhance the standards of their food hygiene practices. The CFS hopes that the revised Guidelines can meet their needs.

For details of the Guidelines, please go to the CFS website:
http://www.cfs.gov.hk/english/whatsnew/whatsnew_act/files/MBGL_RTE%20food_e.pdf

(III) What is Formaldehyde?

Formaldehyde, a chemical, is a colourless gas at room temperature and highly soluble in water with a strong irritating smell. It can be used as industrial disinfectant, as raw material in plastic manufacturing and as embalming agent. Formaldehyde is sometimes added inappropriately in food processing for its preservative and bleaching effects.

However, this chemical also occurs naturally in the environment. As a metabolic intermediate, formaldehyde is present at low levels in most living organisms. Formaldehyde can be found naturally in food, including fruits and vegetables (e.g. pear, apple, green onion), meats, fish (e.g., Bombay-duck, cod fish), crustacean and dried mushroom, etc, up to the levels of 300 to 400 mg/kg.

The World Health Organization (WHO) has established a Tolerable Daily Intake (TDI) of 0.15mg/kg body weight for this chemical. The TDI is the estimated amount of a substance that can be ingested daily (on body weight basis) over a lifetime without appreciable risk. Ingestion of a small amount of formaldehyde is unlikely to cause any acute effect. Acute toxicity after ingestion of large amount can cause severe abdominal pain, vomiting, coma, kidney injury and possibly death. However, the general population is exposed to formaldehyde mainly by inhalation.

The main health concern of formaldehyde is its cancer causing potential. The International Agency for Research on Cancer (IARC) considered that there was sufficient evidence for carcinogenicity in humans upon occupational exposure via inhalation. On the other hand, WHO in 2005 when setting its Drinking Water Guidelines considered that there was no definitive evidence for carcinogenicity upon ingestion.

Food for sale in the HKSAR must be fit for human consumption as stipulated in the Public Health and Municipal Services Ordinance, Cap. 132. The use of prohibited preservatives such as formaldehyde contravenes the Preservatives in Food Regulations and is liable to a maximum fine of HK$50,000 and imprisonment for 6 months. For foods containing natural formaldehyde, there is no international consensus reference on their levels. The testing of formaldehyde in food is included in our food surveillance programme. Follow-up action will be undertaken when there is suspected abuse of formaldehyde in foods. 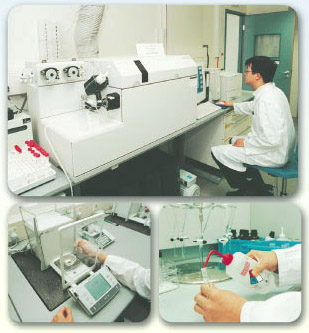 In view of the increasing sophistication in the food production process and the advancement in food science, the WHO advocates a risk-based and proactive food safety control model with sound scientific basis to cope with the changing needs of the community. In line with the WHO's food safety model and as part of the Government's efforts to strengthen the scientific basis of the food safety control work, the Food and Environmental Hygiene Department (FEHD) has established the Food Research Laboratory (FRL) under the
Centre for Food Safety (CFS).

Roles and Scope of Work

The 600m2 FRL consists of laboratory areas and instrument rooms. It is equipped with an array of sophisticated state-of-the-art analytical instruments, including:

Vegetables are essential component of a balanced diet and good sources of dietary fibre, vitamins and minerals, which not only promote gastrointestinal health, but also reduce exposure to the risks of some chronic diseases (including cancer and cardiovascular diseases).

Pesticides are substances used to kill or control unwanted insects, plants, fungi, rodents or other pests. Insecticides, herbicides, rodenticides and fungicides are some commonly used pesticides. Proper use of pesticides can reduce the harmful effects of pests and fungi on crops, reduce soil erosion caused by weeding and increase crop yield. As a result, there are more reasonably priced vegetables which are wholesome, free of pests and harmful substances available in the market, and consumers' health and living quality are thereby enhanced. However, if pesticides are used improperly, consumers may ingest excessive amount of pesticide residues which will affect their health.

Monitoring and Control of Vegetables on Sale in Hong Kong

The CFS of FEHD carries out a Food Surveillance Programme and regularly takes samples of vegetables at import, wholesale and retail levels for testing.

Most of the vegetables on sale in Hong Kong come from the Mainland. All vegetables imported from the Mainland must come from registered farms or purchasing stations under the supervision of the Mainland monitoring authorities. CFS has a Food Control Office in Man Kam To. When vegetables reach Man Kam To, CFS checks relevant documents including Pesticide Declaration Certificate, Monitoring Card etc. Random samples of vegetables will be collected for testing of pesticide residues at the Man Kam To Food Laboratory whenever necessary. Furthermore, CFS collects vegetable samples at the wholesale and retail levels for testing of pesticide residue in the Government Laboratory. Some samples are tested for heavy metals.

CFS refers to the Maximum Residue Limits (MRLs) recommended by Codex Alimentarius Commission in determining whether vegetables contain excessive pesticide residues. MRL is the maximum concentration of a pesticide residue permitted in a food commodity when the Good Agricultural Practice (GAP) is observed. GAP provides that the trade should use the least practicable concentration of permitted pesticides for pest control to safeguard consumers' health. The primary aim of setting MRLs for pesticides in food is to safeguard public health and provides an indicator for the trade.

Foods containing pesticides below MRLs are considered wholesome and fit for human consumption. However, pesticide residue levels exceeding the MRL does not necessarily mean that there is an immediate health risk and there is no cause for undue alarm. It reflects improper use of pesticide or contamination of vegetables and rectification at source is required.

The trade should observe GAP in the use of pesticides:

Sandwich is popular among city dwellers. There are a lot of combination simply by putting any sorts of fillings, such as poultry, meat, seafood, egg and vegetables, between two pieces of bread, and then add dressing.

As the making of sandwich generally involves several steps all done by hand and most sandwiches will not be reheated before consumption, food safety risk is largely increased if the food is not handled properly. To ensure safe consumption, the trade should control the critical control points during the process. Take for example the making of club sandwich: 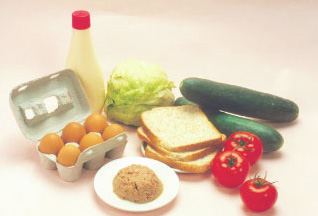 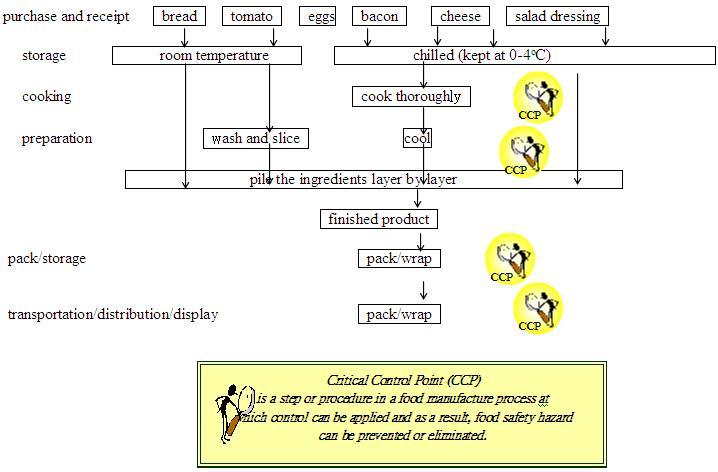 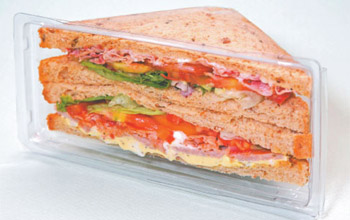 Trans fatty acids (also known as "trans fats") are unsaturated fatty acids with at least one double bond in the trans configuration. A low level of trans fats can be found naturally in food (e.g. in the milk and the fat of sheep and cattle). However, in most cases, trans fats are produced during food processing. Trans fats are made when food manufacturers turn oil from liquid form into semi-solid form so as to increase the shelf life and improve the texture of food, such as in the production of hydrogenated vegetable oil, like shortening and margarines. The process is called "hydrogenation".

Foods made with hydrogenated vegetable oil or used in the cooking process are the main sources of trans fats in our diet. Examples are margarines, biscuits, cakes, puff pastries, salad dressings, dried/powdered non-diary creamers and French fries, etc.

To reduce the intake of trans fats, the trade should: 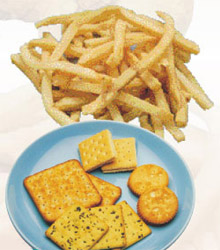 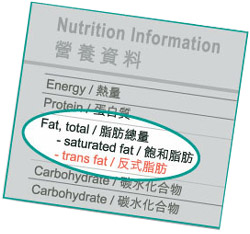 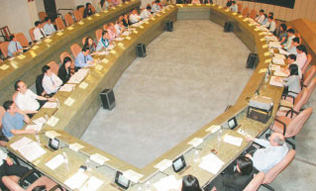 The CFS held the fifth and sixth Trade Consultation Forum on 1 June and 26 June 2007 respectively in which representatives from various food trade associations, food manufacturers, food importers and wholesalers, supermarket operators and retailers participated. Topics discussed include: results of the study on nutrient values of fruits and vegetables; results of the risk assessment study on dietary exposure to chloropropanols of secondary school students; evaluation of the effectiveness of voluntary labelling system for genetically modified food; new labelling requirements on allergens, food additives and date format; and the pre-statutory registration scheme for food importers and distributors. Questions on the amendments to Preservatives in Food Regulations and enforcement of the Food and Drugs (Composition and Labelling) Regulations were answered.

For details of the discussion at the forums, please visit the following web page: http://www.cfs.gov.hk/english/committee/committee_tcf.html.

CFS and the Radio Television Hong Kong jointly organized the Food Safety Day 2007 – "Collective Responsibilities in Ensuring Food Safety" on 18 August at Lung Cheung Mall, Wong Tai Sin. Dr York Chow, Secretary for Food and Health, officiated the event. Featuring singer performance, game booths and exhibition, the event aimed at promoting the collective efforts of the Government, the food trade and the public in ensuring food safety, as well as enhancing the knowledge and skills of the public and the trade on food safety and prevention of unwholesome food.

Importation, manufacture and sale of frozen confections in Hong Kong are regulated by Part V (Food and Drugs) of the Public Health and Municipal Services Ordinance (Cap. 132). According to the Frozen Confections Regulation, a subsidiary legislation of the Ordinance, no person shall sell, for human consumption, any frozen confection unless with the permission in writing granted by the Director of Food and Environmental Hygiene (the Director). Besides, no person shall manufacture any frozen confection unless with a licence granted by the Director and in such premises as shall be specified in such licence. Under the legislation, any frozen confection for sale shall not contain more than 50 000 bacteria or 100 coliform organisms per gram. Frozen confections shall not be kept at a temperature which exceeds -2 degrees Celsius. Any person who contravenes any of the above regulations shall be guilty of an offence, and shall on conviction be liable to a maximum penalty of $50,000 and imprisonment for 6 months.