1. "Centre for Food Safety" take us to "eating with confidence"

As the Chinese saying goes, "Food is people's paramount concern". "Eating with confidence" is one major prerequisite for people to enjoy a happy life. The Centre for Food Safety (CFS) has been established under the Food and Environmental Hygiene Department (FEHD) with this important mission in mind. What is the CFS going to do with "eating with confidence"? Follow me, the Reporter Miss Belittle, and I will tell you why.

Structure of the CFS

There has been increasing public concern over food safety. In view of the urgent need to strengthen the food safety regulatory functions and in response to the higher expectation of the community, the CFS was established on 2 May 2006 under FEHD by subsuming the existing "Food Surveillance and Control Division" and the "Risk Assessment and Communication Division". A Controller, Centre for Food Safety has been appointed to take charge of its operation. 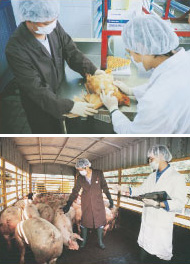 "My main duties are to establish goals and formulate strategies, implement food safety measures and to lead high level negotiations and liaison with the Mainland and overseas food authorities on food safety matters that have local implications," Dr MAK said.

Facing with increasing expectations of the public, how can CFS raise the standards of their services? Dr MAK told Reporter Miss Belittle that the CFS would recruit more staff, including food safety experts, to strengthen its professional team to cope with the increasing workload of the Centre in areas of food surveillance, handling of food complaints, reviewing and updating of food standards and enhancing risk assessment and communication.

How does the CFS strengthen consultation and communication? 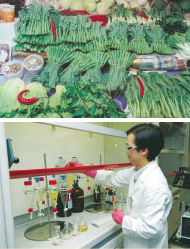 As food technology has been rapidly evolving, food safety standards require constant review and updating, while the methods of and channels for risk communication have to make progress with time as well. To put the best brains together, the CFS will enhance the existing consultative structure by enlisting people from many sectors to strengthen communication with the trade and the public. An Expert Committee on Food Safety, according to Dr MAK, will be established in the next few months. The Committee will be broadly represented, comprising academics, professionals, food experts, trade representatives and consumers. The Committee will provide advice on formulation of food safety measures and review of food safety standards in light of international practices, trends and development. Through various channels such as seminars/talks, meetings, publications, websites etc, the CFS will also strengthen communication and foster exchanges with relevant stakeholders including academic institutions, professional bodies, trade representatives and consumers.

How to strengthen communication with Mainland and overseas authorities? 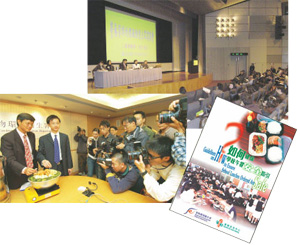 Control at source has been a hot topic recently. "As the Mainland is our major supplier of poultry, livestock, aquaculture produce and other foodstuffs, the CFS will strengthen contact and cooperation with relevant Mainland authorities, including the State General Administration of Quality Supervision, Inspection and Quarantine, Ministry of Agriculture, Ministry of Commerce, local Entry-Exit Inspection and Quarantine Bureaux, the Guangdong Provincial Government and the Shenzhen Municipal Government, so that we can promptly deal with any food safety matters that may have cross-border implications," Dr Mak said. The CFS will also strengthen communication with other countries and areas that export foodstuff to Hong Kong to ensure that all imported food will comply with our food safety standards.

With the establishment of the CFS, I, the Reporter Miss Belittle, just like many other citizens in Hong Kong, have high expectations of the CFS formed by a multi-disciplinary professional team to further enhance the food safety standards of Hong Kong.

Proper use of pesticide on vegetables can improve crop quality and reduce harmful effects of the pests. However, if pesticide is used improperly, consumers may ingest excessive amount of pesticide which affects their health and may lead to acute food poisoning with symptoms such as vomiting, diarrhoea, abdominal pain, dizziness and numbness. In severe cases, the victim may even have difficulties in breathing, blurred vision and convulsion. Prolonged consumption of vegetables with excessive pesticides may also damage the nervous system or other organs such as the liver and kidneys. Some pesticides may be transferred via the placenta or breast feeding, thereby affecting development of the baby.

The use of pesticide will inevitably leave some residues on the crops. However, if pesticide is used properly, the residual level would be small and consumption of these vegetables will not affect health. Excessive pesticide residue can arise from several causes, including excessive use of pesticide, insufficient time for pesticide to decompose before harvesting as well as environmental contamination. Pesticide residual problems are more commonly seen in leafy vegetables such as Chinese flowering cabbage, Chinese white cabbage, spinach, water spinach, garland chrysanthemum, matrimony vine and Chinese kale. 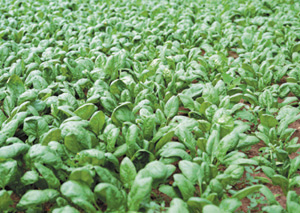 The Centre for Food Safety (CFS) of Food and Environmental Hygiene Department (FEHD) operates a Food Surveillance Programme and regularly takes samples of vegetables at import, wholesale and retail levels for testing. Most of the vegetables on sale in Hong Kong come from the Mainland. CFS has a Food Control Office at Man Kam To and samples vegetables imported from the Mainland. All vegetables imported from the Mainland must come from registered farms or purchasing stations under the supervision of the Mainland monitoring authorities. When the vegetables reach Man Kam To, CFS would inspect relevant documents including Pesticide Declaration Certificate, Monitoring Card etc. Random samples of vegetable will also be collected for testing of pesticide residues at the Man Kam To Food Laboratory whenever necessary. In addition, CFS would also collect vegetable samples at the wholesale and retail levels for testing of pesticide residues in Government Laboratory. Furthermore, vegetable samples will also be collected and tested for heavy metals. So far, the existing surveillance and control system on vegetables in Hong Kong is effective in safeguarding public health.

CFS currently take reference from the Maximum Residue Limits (MRLs) recommended by Codex Alimentarius Commission in determining whether vegetables contain excessive pesticide residues. MRL is the maximum concentration of a pesticide residue permitted in a food commodity when Good Agricultural Practice is observed. The primary aim of setting MRLs for pesticides in food is to safeguard public health and provides an indicator for the trade. Foods containing pesticides below MRLs are considered wholesome and fit for human consumption. However, pesticide residue levels exceeding the MRL does not necessarily mean that there is an immediate health risk. There is no cause for undue alarm for the public. Instead, pesticide residual levels exceeding the MRL reflect improper use of pesticide or contamination of the vegetable and rectification at source is required.

In 2005, some 20 000 vegetable samples were collected at the import, wholesale and retail levels for testing of pesticide residues. Only 10 samples were found to be unsatisfactory.

Recent findings of an environmental concern group alleged that prohibited pesticides or excessive pesticide residues were found in some of the vegetables sold in two local chains of supermarket. CFS immediately took a series of follow-up action, including contacting the party concerned for more information, liaising with the two supermarket chains involved on the source of vegetables and their suppliers, informing the Mainland authorities of the findings and collecting vegetable samples from local supermarkets for testing of pesticide residues. A total of 39 samples of vegetables and beans were collected from a number of supermarkets earlier on for testing of pesticide residues and all were found to be satisfactory.

Vegetables are an essential component of a healthy diet. Members of the public should take a balanced diet and eat a variety of fruits and vegetables to avoid excessive exposure to contaminants from a small range of food items. If consumption of "poisonous" vegetables is suspected, one should seek medical advice immediately from hospitals or clinics. 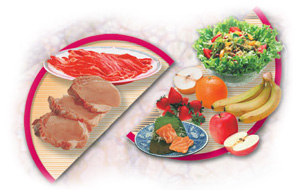 Cross contamination refers to the transfer of bacteria from a food item to another. Bacteria may be transferred by direct contact (which occurs, for example, when a food item or its juices come into contact with another food item) or indirect contact (through hands, chopping boards, towels, etc.).

Some common examples of "cross contamination" are: 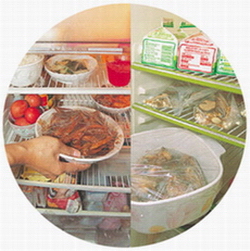 Cross contamination is an important contributing factor of food poisoning. To prevent such incidents, we should reduce the risk of "cross contamination" by observing the following guidelines:

(1) Raw and Cooked Foods Should Be Processed Separately 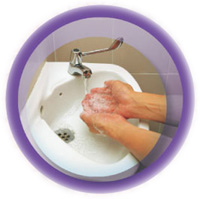 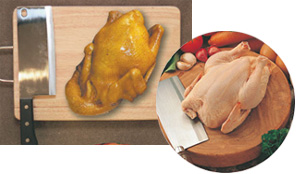 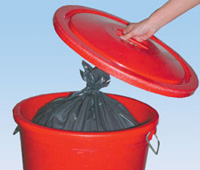 Welcome to the "Readers' Corner." This is your host, the Food Safety Wunderkind. To ensure food safety, we should wash the food before cooking and consumption. But how can we do it properly? Let me tell you.

Case No. 1: Is the waxy substance on the skin of apples edible?

Some people are concerned that the waxy substance on the skin of apples may not be safe to eat.

The skin of freshly picked apples usually has a natural protective layer of wax to preserve the moisture. However, during reaping and processing, the protective wax layer may be damaged. Producers usually add natural, edible wax such as candelilla wax, carnauba wax and shellac, etc. onto the skin to keep the moisture.

Therefore, after thorough washing and wiping the skin gently, apples are safe to eat. There is no need to worry that the waxy substance will have any adverse effect on health.

Case No. 2: How to remove pesticide residues from vegetables?

Some people do not know how to remove the pesticide residues in vegetables and worry that their health will be affected after consumption.

As most pesticides used in vegetables are water-soluble, soaking in water will help reduce the amount of pesticide residues. 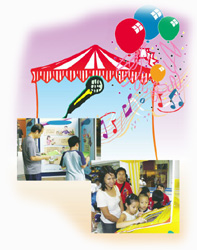 Cross contamination is a major factor during food preparation leading to food poisoning. It is adopted as the theme of Food Safety Day 2006 to enable the public and the food trade to know cross contamination better. Activities will be organized with a view to:

Details of the activities will be announced later. Please check the web site of the Food and Environmental Hygiene Department at http://www.fehd.gov.hk.

The Food and Drugs (Composition and Labelling) Regulations require food manufacturers and packers to label their prepackaged products in a uniform and legible manner. 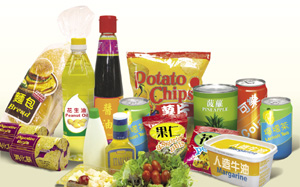 Unless there is exemption in the Regulations or otherwise stated, the following information shall be listed in either the English or the Chinese language or in both languages (if both the English and Chinese languages are used in the labeling of prepackaged food , the name of the food and the list of ingredients shall appear in both languages) on the label of prepackaged food: