Hi, everybody! As a young reporter, I always like trying various delicacies. I have full confidence in the food safety in Hong Kong. After visiting the "Food Safety Roadshow" held at Olympian City in Kowloon on 10 July (Saturday) as part of the activities of Food Safety Day, I realized that food safety cannot rely on the Government alone. A concerted effort of the food trade and the public is needed if we want to uphold the food safety standards. In this hot summer, the Food and Environmental Hygiene Department (FEHD) had organised a series of activities on food safety in Hong Kong. In order to bring first-hand information to the "gourmets", I would give a detailed report on the activities of Food Safety Day.

Food Safety Day, with the theme of "Food Safety is Everyone's Business", was a major campaign featuring a host of activities organized by FEHD to promote the attention and active participation of the public and the food trade in maintaining food safety in Hong Kong. The "Food Safety Roadshow" on 10 July kicked off a series of programmes on hygiene education and publicity activities between July and November.

The "Food Safety Roadshow" at Olympian City in Kowloon comprised of variety shows, singing by artistes, booth games, hygiene education videos and exhibitions, etc. The purpose was to inculcate, at different levels, the message of food safety in the participants. The simple yet solemn opening ceremony was officiated by Mrs Carrie Yau, Permanent Secretary for Health, Welfare and Food, together with Mr Gregory Leung, Director of Food and Environmental Hygiene, Mr Philip Chow, Head of Chinese Programme Service of Radio Television Hong Kong, Mr Lee Kwong-lam, Vice-president of the Hong Kong Food Council and Ms Connie Lau, Deputy Chief Executive of the Consumer Council. The opening symbolized the tripartite efforts of the Government, the food trade and the public in promoting the message of "Food Safety is Everyone's Business".

The artistes played interesting and educational games such as "Funny Scores Shopping Bags", "Defrosting Q&A" and "Food Safety Tongue Twister" with the participants on the spot to test their knowledge of food safety. The games helped to remind the public and the food trade on important issues when purchasing food or handling raw, cooked or frozen food. The programmes were much welcome by the public and attracted many people at the venue.

As part of the Food Safety Day activities, FEHD would also organize other interesting programmes. 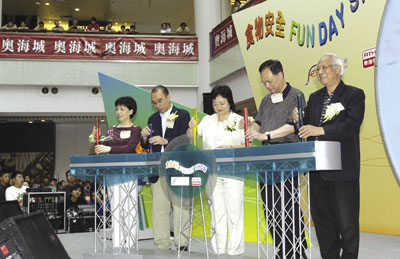 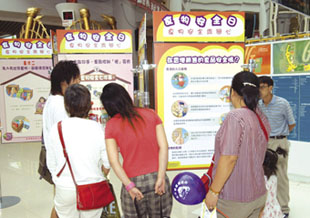 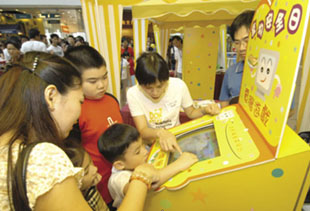 Children participating in the computer games on the "Food Safety Day".

In order to gauge the public's views on nutrition information of existing labels on pre-packaged foods and to collect public opinions on the implementation of the Labelling Scheme on Nutrition Information, the Government conducted an opinion survey at the beginning of 2004. The survey successfully contacted 1 200 people aged 18 or above over the telephone and the results were as follows:

Opinions towards the implementation of the Labelling Scheme on Nutrition Information

As shown in the above results, most people recognised the importance of the nutrition label, and supported the Government's introduction of the LSNI. Before finalising the details and implementing the LSNI, the Government would assess the impact of the proposed regulatory measures in order to estimate the scheme's cost-effectiveness and draw up a package of measures most suitable for our local situation.

Does Barbecued Meat Cause Cancer?

Traditional Chinese-style barbecued meat (siu mei) such as roasted pork, BBQ pork and roasted duck/goose, are our favourite foods. In the holidays, we may also go outdoors to embrace mother nature and barbecuing is often a popular activity. Furthermore, jerky, a traditional Chinese-style snack, is also prepared by barbecuing. What are the risks inherent in these barbecued delicacies? How can we prevent or reduce the risks?

A number of studies conducted in recent years show that cancer-causing compounds, polycyclic aromatic hydrocarbons (PAHs) 1, can be produced when barbecued meat is not processed properly. It is because fat dripping from the meat onto the heat source during the barbecuing process produces PAHs which will contaminate the meat surface, and incomplete combustion of cooking fuel (such as charcoal or wood) may also generate PAHs. On the other hand, the Food & Environmental Hygiene Department has recently conducted a study on barbecued meat in Hong Kong. The findings of the study show that:

As most siu mei offered for sale in the market are prepared by gas grilling or electric oven roasting, consumption of such food should, generally speaking, not increase the risk of intaking PAHs.

(For details, please visit our web page at http://www.fehd.gov.hk/english/pestcontrol/report/pah/index.html)

Therefore, when purchasing and eating barbecued meat, or choosing a barbecuing method to cook food, we should observe the following food safety tips in order to reduce the risks -

When Purchasing and Eating Barbecued Meat: 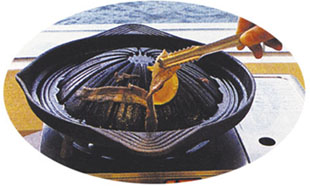 1 PAHs refer to a large group of organic chemicals containing rings of carbon and hydrogen atoms. Over 100 kinds of PAHs can be found in air, soil, water and foods and are present as pollutants in the environment.

The Food and Drugs (Composition and Labelling) (Amendment) Regulation 2004 was published in the Gazette in May this year by the Food and Environmental Hygiene Department (FEHD) for the purpose of amending the Food and Drugs (Composition and Labelling) Regulations. Under the amended regulations, food manufacturers are required to declare, on the food labels, (1) both the (functional) class, the exact name or international code of the food additive used; and (2) the presence of eight types of substances which are known allergens for easy identification by the public. These substances are: The amended legislation came into effect on July 9 this year. To allow the trade sufficient time to update the labels of pre-packaged foods in accordance with the said amendment, a grace period of 36 months has been granted.

Certain requirements were also relaxed under the new legislation. For example, the restriction on the marking sequence of the year, the month and the day of "best before" or "use by" date would be lifted provided that the exact sequence is clearly declared in both Chinese and English. The restriction of additives used in condensed milk, evaporated milk and butter would also be relaxed in accordance with the CODEX standards. Drinks with alcoholic strength by volume of more than 1.2 per cent but less than 10 per cent would continue to be exempted from the requirement of ingredients labelling. In addition, most of the drinks with an alcoholic strength of more than 10 per cent, such as wines and fruit wines, would also be exempted from the requirement of ingredient labelling and durability period.

For details, please visit our web page at here.