We cook foods to make them safe, likewise tastier, to eat.  However, undesirable chemical by-products, known as process contaminants, can be formed unintentionally during home cooking or manufacturing.  Acrylamide is a type of process contaminant.

Acrylamide is mainly formed in starchy foods, such as potatoes and bread, cooked under high temperatures as a result of the Millard reaction. It is a chemical reaction between the naturally present free amino acid asparagine and reducing sugars, such as glucose and fructose, in food when they are cooked or processed at 120°C or above.  In general, more acrylamide will be formed under higher cooking temperature and longer cooking time.  Many baked and fried foods like biscuits, chips, French fries and toast contain relatively high levels of acrylamide, whereas boiling and steaming do not typically form acrylamide. 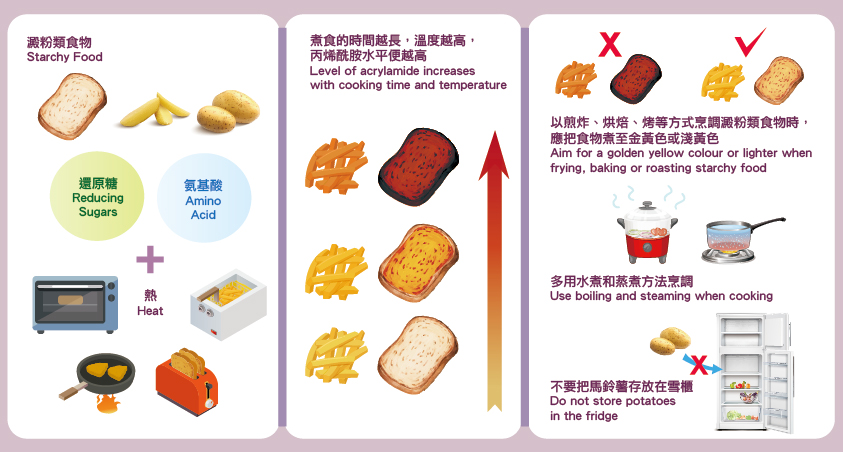 Following ingestion, acrylamide is absorbed and distributed to all organs for metabolism.  Animal experiments revealed that acrylamide may cause reproductive and developmental problems, and is associated with increased risk of developing cancers. As such, intake of acrylamide from our diet should be maintained as low as possible.

In general, acrylamide can be reduced by not cooking food at high temperatures for too long. When frying, baking, toasting or roasting starchy foods like potato and bread at home, consumers should aim for a golden yellow colour or lighter. Storing potatoes intended for frying and baking, etc. in fridge is not advisable as more reducing sugars will be formed, facilitating acrylamide formation during subsequent cooking. Furthermore, blanching vegetables before stir-frying or cooking them by boiling or steaming can also help reduce the formation of acrylamide. As starchy foods are key to our everyday diet, it is probably impractical to completely avoid acrylamide in food. Consumers should have a healthy and balanced diet and eat plenty of fruits and vegetables.

All along the trade is advised to seek ways to reduce the level of acrylamide in food.  The trade may refer to the Centre for Food Safety's "Trade Guidelines on Reducing Acrylamide in Food" and the Codex's "Code of Practice for the Reduction of Acrylamide in Foods" on reduction in acrylamide level during the selection of raw materials and the formulation of recipes and food processing conditions.