What are Bracken Ferns?

Bracken ferns are a group of ferns of the species Pteridium aquilinum and its numerous subspecies.  Bracken ferns are found in many parts of the world and can grow especially fast in defrosted areas like at the edge of woodlands and recently abandoned farmlands and pastures and also in sunny slopes.   They are found in most continents and under many climates except for desert and arctic climates.  They are most commonly found in Europe, North America, Australia and New Zealand and are considered weeds in many other countries.  Bracken fern is native to Hong Kong and China, and is mainly found in southern China and in Taiwan in these geographical areas.  Its leaves (fronds) have distinctive shape and have rhizomes grown underground.

Bracken ferns had been harvested for food and other uses for centuries.  It has been reported to be grown commercially in Japan, Canada, Siberia, USA and China for consumption.  The bracken fern rhizomes had been used to make bread by Maori natives in New Zealand and in Europe during food shortage.  In Japan, young bracken fern leaves (fiddleheads) are reported to be prepared by boiling or by pickling before further preparation.  Bracken ferns are known to be a hazard to grazing farm animals as they can cause a number of diseases after ingestion.  Chemicals from bracken ferns can also be found in the dairy products the affected animals produced.  The Canadian Government had advised people who collected fiddleheads of another species of fern (ostrich fern) for food to clean, cook in generous amount of boiling water or steam till tender before further preparations in order to prevent food poisoning due to improper preparation.

What is the Health Concern?

Numerous chemicals had been isolated from bracken ferns.  Of those chemicals, ptaquiloside, a highly water soluble chemical, had aroused much interest as it may have carcinogenic properties.  Toxic chemicals were reported to be found in all parts of bracken fern.

A number of animal carcinogenicity studies had been performed by oral administration with dried, processed and components isolated from bracken ferns.  In animals studies on mice, rats, guinea pigs, toads except cows, bracken fern caused malignant or benign intestinal tumours, especially in small intestines.  It can also cause bladder cancer in rats, guinea pigs and cows.  Rats study with bracken fern diet as processed for human consumption had produced intestinal tumours.  However, the incident rate is lower than that of unprocessed bracken fern.

How to Reduce the Risk?

With reference to the above findings and that bracken ferns are not commonly consumed in Hong Kong, we have the following recommendations to consumers: 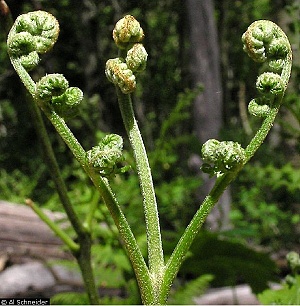