2.1 How can the radioactive substances be dispersed in a nuclear power plant accident?

If a nuclear power plant does not function properly, radioactivity may be released into the surrounding area by a mixture of products generated inside the reactor. The main radionuclides representing health risk are radioactive caesium and radioactive iodine. If radioactive fission products are released into the atmosphere, some of the gaseous and volatile radioactive isotopes could be carried by wind. The invisible radioactive material would behave in a way similar to a plume or cloud of smoke dispersing into the atmosphere, with some of its contents deposited onto the ground. The concentration of radioactive materials in the plume decreases as they move further away from the relevant site. Hong Kong is 3000 km from Japan . The plume will be much diluted when it reaches Hong Kong . 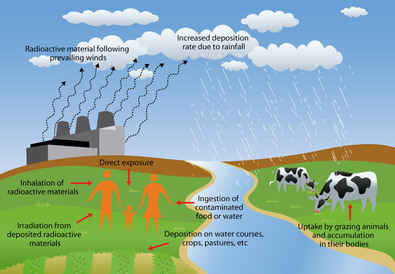 2.2 How can the radioactive materials contaminate our food?

2.3 What are the possible health effects of consuming radioactively contaminated foodstuffs?

Naturally occurring radioactivity is actually present in the environment. Potential damage caused by low levels of radioactivity may be repaired by normal body metabolic processes. In a nuclear power plant accident, the general population is not likely to be exposed to high radiation doses. In general, foodstuffs available on markets are unlikely to be contaminated with very high levels of radioactive substances after a nuclear emergency. The chance of acute health effect is not common. If people are exposed to high dose of radiation, radiation sickness with acute symptoms like nausea, vomiting, extreme tiredness, hair loss, skin burns and diminished organ function will occur and immediate medical attention is required. In addition, prolonged consumption of radioactively contaminated foodstuffs may increase the risk of cancer in exposed persons.

2.4 Can I reduce the level of radionuclides in food through food preparation?

2.5 Is there any international standard on radioactive substances in foodstuff?

I-131, Cs-134 and Cs-137 are artificially produced fission products* which do not naturally occur in food. However, these radionuclides can get into food after it has been discharged into the environment from civil (e.g. nuclear reactor operations) or military nuclear operations (e.g. above-ground nuclear testing) and then passes through the food chain. Therefore, low levels of I-131, Cs-134 and Cs-137 may be present in food due to possible contamination from the environment. The detection of high levels of these radionuclides in food may suggest possible radioactive contamination from a nuclear emergency.

2.7 Under what circumstances will the CFS apply the section  30 of the Food Safety Ordinance to prohibit food import?

The Director of Food and Environmental Hygiene may make an order under section 30 of Cap. 612 if he has reasonable grounds to believe that the making of the order is necessary to prevent or reduce a possibility of danger to public health or to mitigate the adverse consequence of a danger to public health. The order may prohibit the import and supply of problem food and order the recall of such food.

2.8 How to assess the internal radiation dose (internal dose) received through our diet?

2.9 What kind of food are likely to be contaminated after a nuclear accident and why?

Foods can be contaminated with radioactive materials as a result of a nuclear emergency. The surface of foods like fruits and vegetables or animal feed can become radioactive by deposit of radioactive materials falling on it from the air or through rain water. Under such circumstances, the large leafy areas of leafy vegetables can effectively intercept the radioactive contaminants that deposited from the atmosphere, making them more susceptible to radioactive contamination. On the other hand, when lactating cows graze on contaminated herbages of the early fallout, the radionuclides will soon transfer and appear in their milk. Therefore, in general, foods consumed fresh, such as milk, leafy vegetables, and fruit, are initially more likely to be contaminated after a nuclear accident.

Depending on the agricultural practices in the area of contamination and the stage of growing or harvest season at the time of the accident, grains, root crops, other produce, and animal-derived food products may become contaminated at later stage.

During the early stage of a nuclear accident, monitoring should be focused on radionuclides that have a greater impact on human health including iodine-131, caesium-134 and caesium-137. For the monitoring of plutonium in food, we will keep in view the latest development on the issue and the recommendations by the international organizations (e.g. the International Atomic Energy Agency and the World Health Organization) and make necessary actions.

2.11 Would seafood sourced from waters around Japan and other areas be affected by Fukushima nuclear incident? Is it safe to eat?

After the Fukushima nuclear incident, the radionuclides that may affect the seafood in the direct vicinity of the nuclear power plant are mainly I-131, Cs-134 and Cs-137.

I-131 has a short half-life of eight days. Its level will drop significantly through natural radioactive decay and is not expected to be transported over long distances by ocean currents. Therefore, I-131 is not expected to pose long-term impact in marine pollution.

On the other hand, the longer lived radiocaesium (Cs-134, 2 years half-life and Cs-137, 30 years half-life) could be transported over long distances by ocean currents. The great quantity of water in the Pacific Ocean, however, will rapidly disperse and dilute the released radioactive materials. Levels of radioactivity in seafood collected away from the waters surrounding Japan are expected to remain significantly below levels of any public health concern.

In view of the Fukushima nuclear incident, a prohibition order has been issued to control the import and supply of a variety of Japanese food products from five prefectures of Japan. Import and supply of chilled or frozen aquatic products from the five prefectures are prohibited, unless they are accompanied by a certificate issued by the competent authority of Japan stating that the radiation levels do not exceed the guideline levels laid down by Codex. On the other hand, radioactivity of food, including aquatic products, produced locally or imported from areas other than Japan is being monitored through the CFS's routine surveillance programme. Surveillance results and information obtained so far did not suggest that is an area of concern. With effective measures in place, seafood available on market is not likely to be contaminated with high level of radioactivity.