The Centre for Food Safety (CFS) of the Food and Environmental Hygiene Department today (December 5) announced the test results of a recently completed seasonal food surveillance project on the microbiological quality of poon choi. A total of 30 samples were collected and all passed the tests.

A CFS spokesman said, "As poon choi is popular for gatherings during winter, and there were previous cases of bacterial food poisoning associated with poon choi, the CFS has continued to conduct a seasonal food surveillance project this year to assess the microbiological quality of poon choi. A total of 30 poon choi samples were collected from different retailers (including online retailers) for testing of common food poisoning organisms including Bacillus cereus, Clostridium perfringens, Salmonella, coagulase-positive staphylococci organisms and Vibrio parahaemolyticus."

Despite the satisfactory results of all samples tested, the spokesman reminded members of the public to be careful when purchasing and enjoying this seasonal delicacy. He advised consumers to order poon choi from licensed and reliable shops, reheat poon choi thoroughly before consumption, consume the food as soon as possible or keep the food at temperatures above 60 degrees Celsius, avoid prolonged storage of poon choi at room temperature to reduce the risk of bacteria growth, and stop consuming the food if it tastes or smells abnormal.

"The public should also maintain a balanced diet and avoid eating too much food with high levels of energy, sugar, salt or fat," the spokesman said.

He also appealed to the food trade to plan thoroughly in advance to secure adequate manpower, space and equipment for making poon choi and not to entertain orders beyond handling capacity. A well-organised work procedure can help prevent cross-contamination. As such, before preparation of poon choi, temporary food handlers should be trained to make sure that they are familiar with the working environment and adhere to safe food preparation practices. Traders are also reminded to check the quality of food ingredients and ensure that the temperatures of chilled and frozen foods are appropriate when they are delivered to them. In addition, to reduce the risk of food poisoning, they should avoid preparing food too far in advance and take note of the temperature in storing, transporting and preparing food.

"All food ingredients should be stored at safe temperatures while perishable items should be stored at 4 degrees C or below. The cooling time of cooked food should be reduced as far as possible. When transporting hot poon choi, it should be kept at above 60 degrees C, and for chilled poon choi, it should be kept at 4 degrees C or below. Poon choi should be reheated thoroughly until the core temperature reaches 75 degrees C or above, or brought to boil before consumption. Poon choi of a larger portion requires more time to reheat before the food can be fully heated," the spokesman said.

The CFS will continue its surveillance of poon choi available in the market to ensure food safety and protect the health of the public. 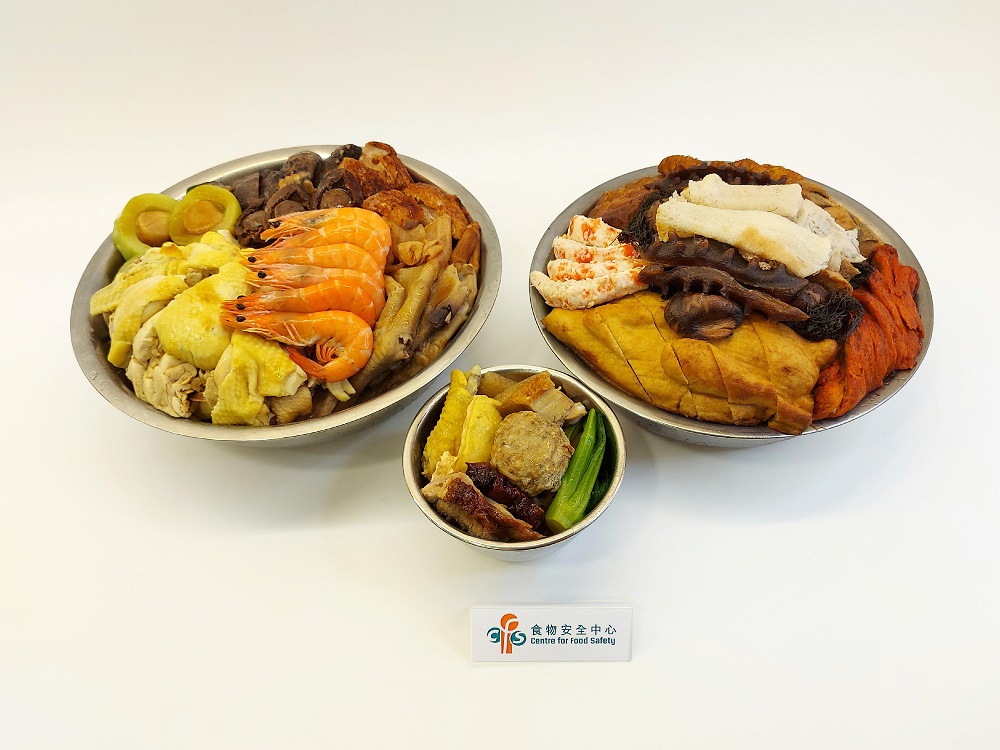 The Centre for Food Safety of the Food and Environmental Hygiene Department today (December 5) announced the test results of the seasonal food surveillance project on poon choi. All 30 samples tested were satisfactory.