The Centre for Food Safety (CFS) of the Food and Environmental Hygiene Department today (June 13) announced the test results of a targeted food surveillance project on frozen confections (first phase). Around 100 samples collected and tested were all found to be satisfactory.

The CFS initiated the targeted food surveillance project in May and collected frozen confection samples, including soft ice-cream, sundaes, ice-cream in wrappers, ice-cream scoops and popsicles, in phases from frozen confections factories, ice-cream vans, convenience stores, supermarkets and restaurants for testing of pathogens (Salmonella and Staphylococcus aureus) and hygiene indicators (coliform bacteria and total bacterial count). The CFS will continue to conduct the second phase of the project and will announce the results in due course for the sake of safeguarding food safety.

The CFS has also published the Food Safety Advice for Manufacture and Sale of Frozen Confections and the relevant poster (see Attachment) for further enhancing food safety of frozen confections. To ensure that their food products are fit for human consumption and meet the legal requirements, the trade are reminded to heat treat frozen confections, such as through pasteurisation, in a proper manner and store ingredients and final products at suitable temperatures to prevent spoilage. The trade should also properly clean, sanitise and maintain equipment and utensils from time to time and establish and practise food safety control plans, and food handlers should adhere to good hygiene practices and maintain high standards of personal and environmental hygiene.

According to the Frozen Confections Regulation (Cap. 132AC), a frozen confection is any confection commonly sold for human consumption in a frozen or chilled state. Frozen confections are high-risk food as they require no further processing such as cooking or heating to eliminate pathogens before consumption. Unsanitary preparation of ice-cream mix, inadequate heat treatment, improper storage temperature, contamination after heat treatment and poorly maintained equipment might increase the microbiological risk in frozen confections. According to the Regulation, frozen confections for sale should not contain more than 50,000 bacteria per gram or 100 coliform bacteria per gram. The maximum penalty for offenders upon conviction is a fine of $10,000 and three months' imprisonment.

The CFS also reminded members of the public to pay attention to the following while enjoying frozen desserts in the summer:

* Buy frozen confections from reputable licensed shops;
* Do not buy and consume any frozen confections which are beyond their expiry dates or in an abnormal condition (e.g. a large quantity of ice crystals on the surface of the product);
* Store frozen confections in the appropriate compartments of the refrigerator if they are not to be consumed immediately after purchase (store chilled items such as pudding in the fridge at 4 degrees Celsius or below; store frozen items such as ice-cream in the freezer at -18 degrees C or below). Soft ice-cream should be consumed as soon as possible;
* Observe the hygienic conditions of the retail shops and check if the temperature in the storage facility is appropriate; and
* Frozen confections are generally high in sugar and fat content. Avoid overconsumption and maintain a balanced diet. 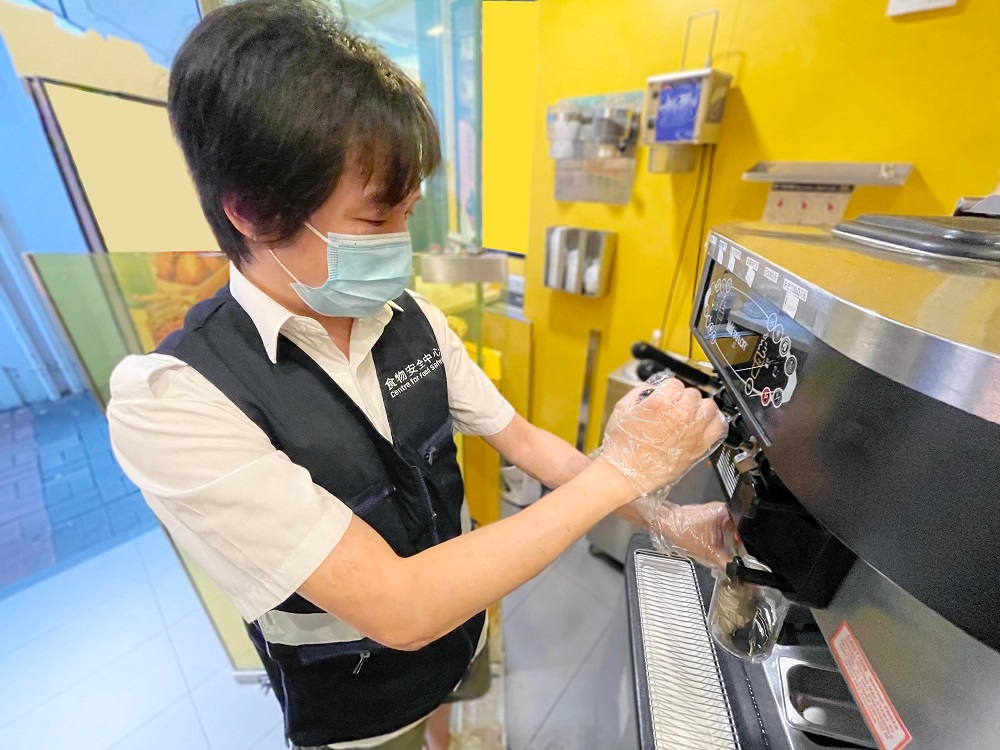 The Centre for Food Safety (CFS) of the Food and Environmental Hygiene Department today (June 13) announced the test results of a targeted food surveillance project on frozen confections (first phase). Around 100 samples collected and tested were all found to be satisfactory. Photo shows a CFS officer collecting a frozen confection sample for testing.