A spokesman for the Centre for Food Safety (CFS) of the Food and Environmental Hygiene Department said today (November 11) that the CFS has been striving to reduce dietary sodium and sugars in Hong Kong and an International Advisory Panel (IAP) on Reduction of Dietary Sodium and Sugars, set up earlier this year, met in Hong Kong these two days to discuss with various stakeholders on how to take forward their work.

The five IAP members from overseas and the Mainland are all renowned experts in public health who spare no effort to promote the reduction of dietary sodium and sugars. They are Professor Norman Campbell from Canada, Professor Graham MacGregor from the United Kingdom, Professor Bruce Neal from Australia, Professor Pekka Puska from Finland and Professor Zhao Wenhua from the Mainland.

"Dietary sodium and sugar intakes are closely related to health. Excessive sodium intake will increase the risk of developing hypertension, fatal stroke and coronary heart disease while dietary sugar intake is a determinant of body weight and dental caries. According to a survey conducted by the Census and Statistics Department in 2011-12, 34 per cent of the local population aged 55 and above suffered from hypertension while 36.6 per cent of the population aged between 18 and 64 were classified as overweight or obese," the spokesman said.

The World Health Organization (WHO) recommends a maximum sodium intake of 2 000 milligrams daily (i.e. 5 grams of salt) and that the intake of salt shall be reduced by a relative 30 per cent as a target by 2025. As regards sugars, the WHO recommends the intake of free sugars, i.e. all monosaccharides and disaccharides added to foods by manufacturers, cooks or consumers, plus sugars naturally present in honey, syrups and fruit juices, should be less than 10 per cent of daily energy intake, i.e. less than 50 grams of free sugar (about 10 sugar cubes) per day for an individual with a daily energy intake of 2 000 kilocalories.

The IAP opines that successful promotion of reduction of dietary sodium and sugars in Hong Kong relies on the tripartite collaboration among the government, food trade and consumers. In addition to the promotion and supporting efforts by the government at policy level, the food trade should also be concerned about the relevant issues and make greater efforts to reformulate food recipes to provide more quality food with less sodium and sugars to consumers. To avoid adverse health effects caused by excessive intake of sodium and sugars, consumers are advised to make careful choices, read nutrition labels and choose food items with lower sodium and sugar content. They could also change their dietary habits by reducing the amount of salt or sodium-containing seasonings added to food and cutting down on food with excessive sugars so as to allow the taste buds to adapt gradually to the light-flavoured food.

The IAP members' two-day programme in Hong Kong included meetings with representatives from the CFS and Department of Health as well as the media. They also attended a public lecture held at the Leighton Hill Community Hall in Wong Nai Chung Road in Happy Valley today to exchange views with more than 100 healthcare professionals, food trade representatives and members of the public.

The spokesman said, "The CFS has been striving to safeguard food safety and promote healthy eating in Hong Kong, including conducting relevant risk assessment studies, implementing nutrition labelling scheme in prepackaged foods and preparing trade guidelines on reducing dietary sodium, sugars and fats. The CFS will continue to work closely with the Department of Health in future to further promote the reduction of dietary sodium and sugars in Hong Kong for the whole population, with reference to the expert advice of the IAP." 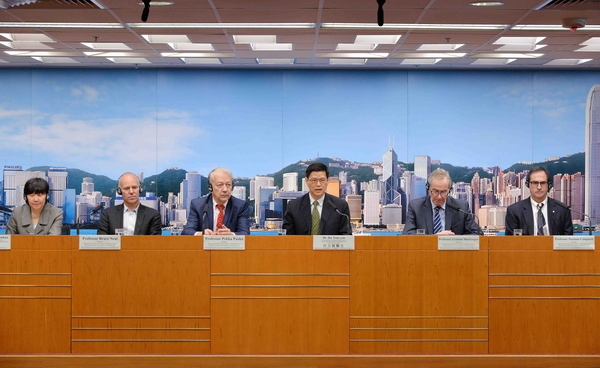 The Consultant (Community Medicine) (Risk Assessment and Communication) of the Centre for Food Safety of the Food and Environmental Hygiene Department, Dr Ho Yuk-yin (third right), and members of the International Advisory Panel (IAP) on Reduction of Dietary Sodium and Sugars in Hong Kong held a press conference today (November 11) on the IAP's efforts in promoting the reduction of dietary sodium and sugars in Hong Kong. Members of the IAP include Professor Zhao Wenhua from the Mainland (first left), Professor Bruce Neal from Australia (second left), Professor Pekka Puska from Finland (third left), Professor Graham MacGregor from the UK (second right) and Professor Norman Campbell from Canada (first right).