The Centre for Food Safety (CFS) of the Food and Environmental Hygiene Department today (December 28) called on parents to refrain from feeding their babies with an infant formula imported from Japan as it was found to have low biotin content and could have potentially adverse health effects on infants. The trade should also stop selling the product.

Details of the infant formula are as follows:

He added, "Other than the product mentioned above, laboratory results showed that the energy value and nutrient content of the remaining 20 infant formulae analysed met the Codex requirements (see attached table).

"According to the risk assessment findings, if infants are fed according to the instructions printed on the label of the infant formula, the biotin intake of the infants will be less than the value recommended by the World Health Organization, i.e. five micrograms per day. If infants between zero and six months old solely rely on the product for intake of biotin, adverse health effects cannot be ruled out. Biotin-deficient infants may show symptoms like hair loss, skin rash, hypotonia and lethargy, etc," he said.

The spokesman noted that overt dietary biotin deficiency is rare and has not occurred in breastfed infants.

He added, "The sample concerned and another infant formula, announced in mid-November with low biotin content detected, were under the same brand but with different packaging.

"The CFS has notified the trade the test results. Since there is no agent nor dedicated importer for the product, members of the public can enquire with the retail outlets where they bought the product if there is any recall arrangement."

Including the 21 samples announced last month, the CFS has completed the tests on the nutritional composition set by Codex in infant formulae known to be available in the local market. Tests on the energy value and nutrient content set by Codex in follow-up formulae intended for young children between six and 36 months old available in the local market will continue and are expected to be completed in mid-2013. 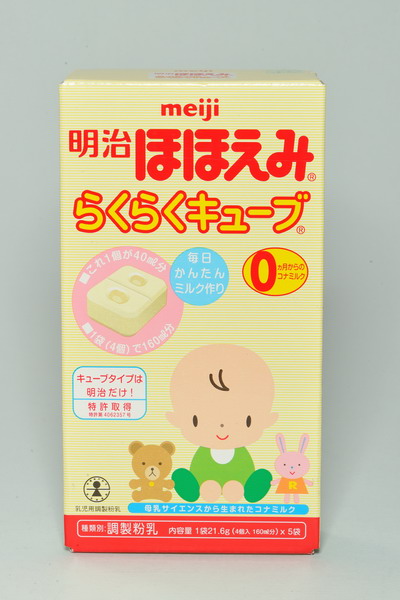 The Centre for Food Safety found that the biotin content of a sample of Japanese infant formula, Meiji (for 0 - 9 months) (pictured) was below the Codex Alimentarius Commission requirement, which may have adverse health effects on infants.