Last month, the Centre for Food Safety (CFS) released the results of the First Hong Kong Total Diet Study (TDS) on dioxins and dioxin-like polychlorinated biphenyls (PCBs), which revealed that the general population was unlikely to experience major undesirable health effects of dioxins and dioxin-like PCBs. The findings also suggested that food of animal origin, particularly fish, meat and poultry, was the predominant route of exposure. This article will address concerns of the public in Q & A format.

Q: Is food contamination by dioxins and dioxin-like PCBs serious?

A: Dioxins and dioxin-like PCBs are contaminants that persist in the environment and bioaccumulate in the food chain, hence, their presence in food is unavoidable. Due to their affiliation with fat, they tend to accumulate in fat tissue at higher concentrations. Based on findings of the first TDS, all 142 composite samples were detected with dioxins and dioxin-like PCBs at various levels and the monthly dietary exposures were estimated to be 21.92 and 59.65 picograms (pg) TEQ/kg body weight (bw) for average and high consumer of the population respectively. [1 g= 1012pg; TEQ is the abbreviation of toxic equivalent which is used internationally for expressing the concentration of these compounds] Both were below the safety reference value [i.e. the provisional tolerable monthly intake (PTMI) of 70 pg TEQ/kg bw] established by the Joint Food and Agriculture Organization/ World Health Organization (WHO) Expert Committee on Food Additives (JECFA). In other words, the general population in Hong Kong was unlikely to experience major undesirable health effects of dioxins and dioxin-like PCBs.

Q: The TDS found that most dioxin exposure was related to eating fish. Should I take out fish in my usual diet?

A: Fish is a popular food in Hong Kong. The TDS found some composite fish samples contained high levels of dioxins and dioxin-like PCBs. It followed that fish was found to be a significant dietary source of dioxins and dioxin-like PCBs. On the other hand, their levels among the fish composite samples varied a lot from 0.012 to 1.056 pg TEQ/g. Besides, fish contains high quality proteins and many other essential nutrients such as omega-3 fatty acids. Overall speaking, moderate intake of a variety of fish can balance the risk and benefits. 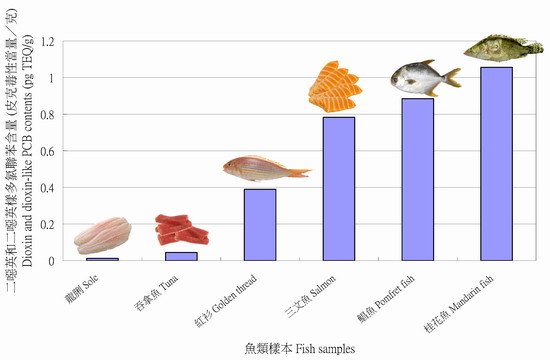 A: Concern has been raised about the exposure from drinking fish soup among pregnant or lactating women. In our study, the composite Chinese soup samples were found containing dioxin and dioxin-like PCBs at the lowest level (mean: 0.007 pg TEQ/g) among all the samples tested. Drinking fish soup is unlikely to result in excessive exposure to dioxins and dioxin-like PCBs. For those who are really concerned, skimming away the fat before drinking the soup can be an option to reduce the exposure.

Q: Would CFS provide the dioxin levels in individual food samples collected for TDS so that the public can make the right choice of food?

A: The TDS is not able to provide dioxin levels in individual food samples. It is because individual samples of the same food collected from the market were prepared into table ready forms and then combined into a single composite sample for analysis. In other words, the composite samples for analysis were derived from various sources, in which average substance levels, instead of individual data, were obtained.

Q: Are elderly individuals at a higher risk to dioxin exposure?

A: Among the elderly, dietary exposures of high consumers were found slightly exceeding the PTMI in our study. However, it does not necessarily mean that their health is at risk provided that the average exposure over long period has not exceeded the PTMI as its emphasis is on a lifetime exposure.

The CFS started to conduct the TDS in March 2010 for estimating dietary exposures of the Hong Kong people to over 130 substances including contaminants and nutrients and assess the associated health risks. The study comprises food purchase and preparation, laboratory analysis and dietary exposure estimation. In essence, the substance levels are measured in foods in table-ready forms, taking into consideration any possible changes during cooking.

Based on the food consumption pattern of the local population, 150 foods commonly consumed were selected. A total of 1 800 samples were collected and prepared into table ready forms, and combined into 600 composite samples for analysis. Among them, 142 composite samples from 71 food items, mainly food of animal origins, were tested for dioxins and dioxin-like PCBs.