Some people choose to eat raw or undercooked foods for the original taste, but this comes with a higher risk of food poisoning.  Consumption of contaminated raw foods is one of the most common causes of local food poisoning cases.

Food can be contaminated with pathogens, including “superbugs” (microorganisms resistant to antimicrobials), in different stages of food processing from farm to table.  We should therefore pay attention to the farming/growing environments of foods commonly consumed raw.  For example, oysters which are filter-feeders may ingest norovirus and Salmonella in contaminated water environments during feeding.  Similarly in farms, vegetables grown in the field may be contaminated with Salmonella and E. coli  if the irrigation water is polluted or the farmers handling them do not observe personal hygiene.

Moreover, the food processing environment may harbour microorganisms.  For instance, smoked salmon may be contaminated with Listeria monocytogenes in its processing environment.  Listeria monocytogenes cannot be eliminated by the cold smoking process and the long shelf life of smoked salmon allows the bacterium to grow.  In fact, food handlers may also be a source of contamination if they do not observe good hygienic practices when handling foods, in particular raw foods involving manual handling, such as sushi and sashimi.  To get rid of pathogens potentially present in raw foods, we should cook food thoroughly as heat can effectively kill pathogens. 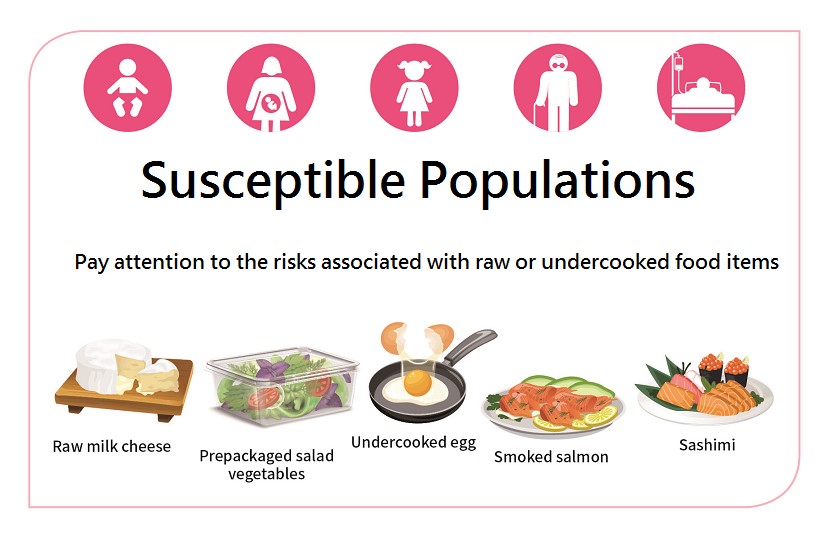 Figure: Persons susceptible to pathogen infections are advised not to consume raw or undercooked foods.

Food poisoning may happen to anyone, but susceptible populations including pregnant women, infants, young children, the elderly and people with weakened immunity (for examples, people with diabetes, liver or kidney diseases, organ transplants and HIV infection, or people receiving chemotherapy or radiation therapy) are, due to their health status, at a higher risk of being infected or having complications if they consume raw or undercooked foods.  The symptoms of food poisoning range from mild to severe and vary depending on the type of pathogens.  The most common symptoms include vomiting, diarrhoea, abdominal pain and fever, yet more severe or even life-threatening symptoms may occur in the susceptible populations.  For example, Shiga toxin-producing E. coli (STEC) infection in very young children and the elderly is more likely to be associated with the haemolytic-uraemic syndrome (HUS).  For Listeria infection in pregnant women, the symptoms may be relatively mild in the mothers, but the passage of the bacterium through the placenta may cause miscarriage, stillbirth or even infant death.  In the case of the elderly and people with weakened immunity, Listeria infection may lead to severe bloodstream or brain infections.

Antimicrobial resistance (AMR) has become a major global public health concern.  In 2015, the 68th World Health Assembly launched a global action plan on AMR by applying a “One Health” approach to combat this emerging health threat.  To tackle AMR locally, the Government launched the Hong Kong Strategy and Action Plan on Antimicrobial Resistance (2017-2022) in 2017 and called for multi-sectoral collaboration.

According to the World Health Organization (WHO), AMR is the ability of a microorganism (like bacteria, viruses and some parasites) to stop an antimicrobial agent (such as antibiotics, antivirals and antifungals) from working against it.  As a result, standard treatments become ineffective, infections persist and may spread to others.  Nevertheless, AMR is a natural phenomenon.  Microorganisms become antimicrobial resistant spontaneously by gene mutation or gene transfer among each other.

Many factors lead to the rise of AMR.  One major contributing factor is the misuse and overuse of antimicrobial drugs, which accelerates the emergence of AMR in microorganisms.  When antibiotics are given to sick people or food-producing animals, bacteria susceptible to antibiotics are killed and bacteria with resistant genes survive.  Therefore, AMR bacteria may outgrow their counterparts and develop in our bodies or the guts of food-producing animals.  These bacteria can spread among the public through the means shown below. 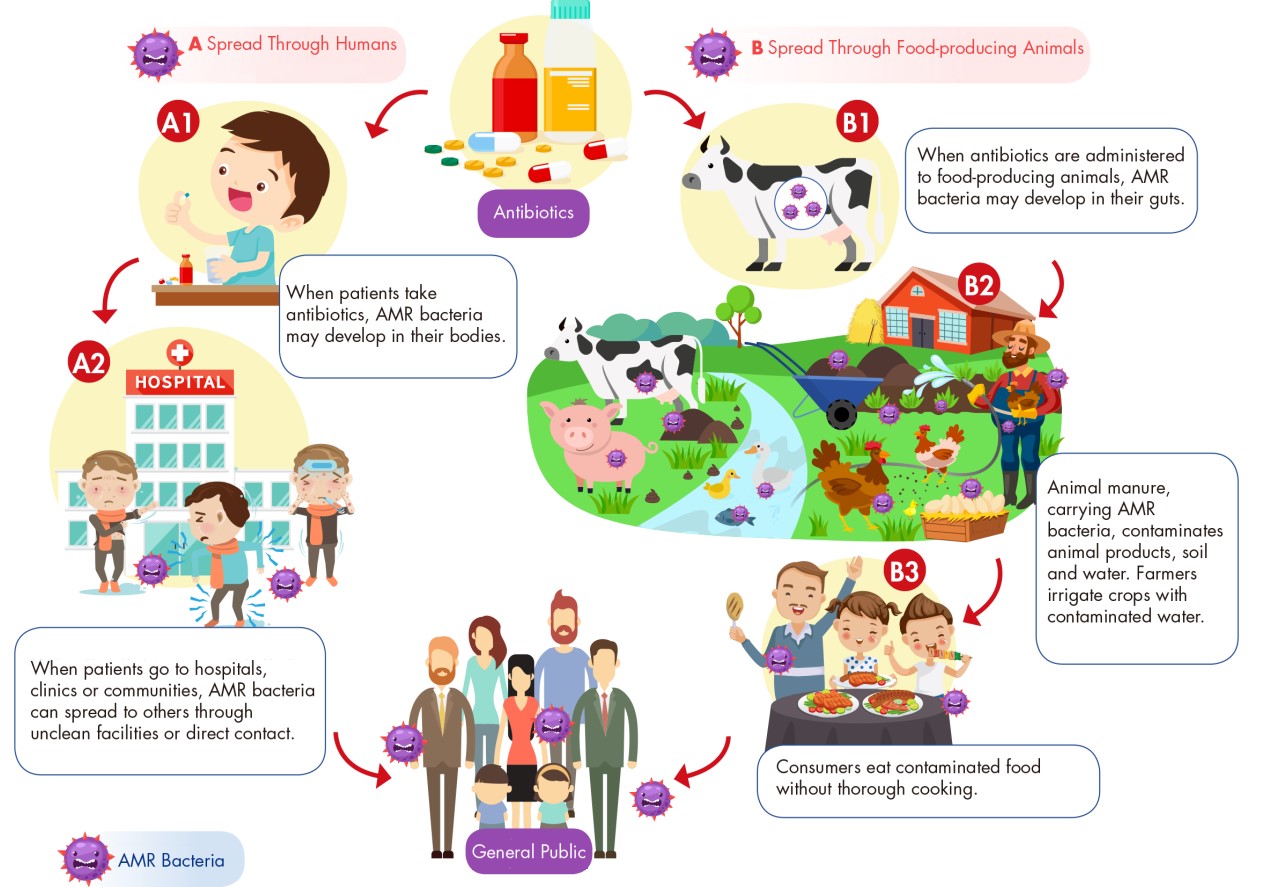 Diagram:       Spreading of AMR bacteria through humans (Path A) and food-producing animals (Path B)

What Are the Measures to Contain AMR in the Food Chain?

To effectively minimise the emergence of AMR in the food chain and contain its spread, coordinated efforts across different sectors, including the veterinary profession and the agricultural, environmental and food industries, are required.  Preventive measures are of the utmost importance.  For examples, farmers should optimise the application of antimicrobials in livestock, antibiotics should not be used as growth promoters, and veterinarians should assist food animal production farms to adopt good husbandry practices to reduce the need for antimicrobials.  As for food producers, they should take effective sanitation measures to maintain food hygiene and avoid cross contamination during food processing.


2)  Tackling Superbugs in Foods
What Are Superbugs?

From time to time, there are media reports on finding of AMR bacteria in foods or food-producing animals.  AMR bacteria are usually highlighted in media report as “superbugs”, which generally refer to microorganisms that have developed AMR.  Different superbugs are reported usually because of their resistance to a wide range of antimicrobials or certain last-resort antimicrobials, which suggests emerging threats of treatment failure.  Superbugs are usually named for their resistance genes or traits together with the names of the microorganisms.  Extended-spectrum β-lactamase (ESBL)-producing Enterobacteriaceae is a superbug of concern.  β-lactam is a large class of commonly used antibiotics.  ESBLs are enzymes that can break down nearly all β-lactams and make them ineffective for treatment. 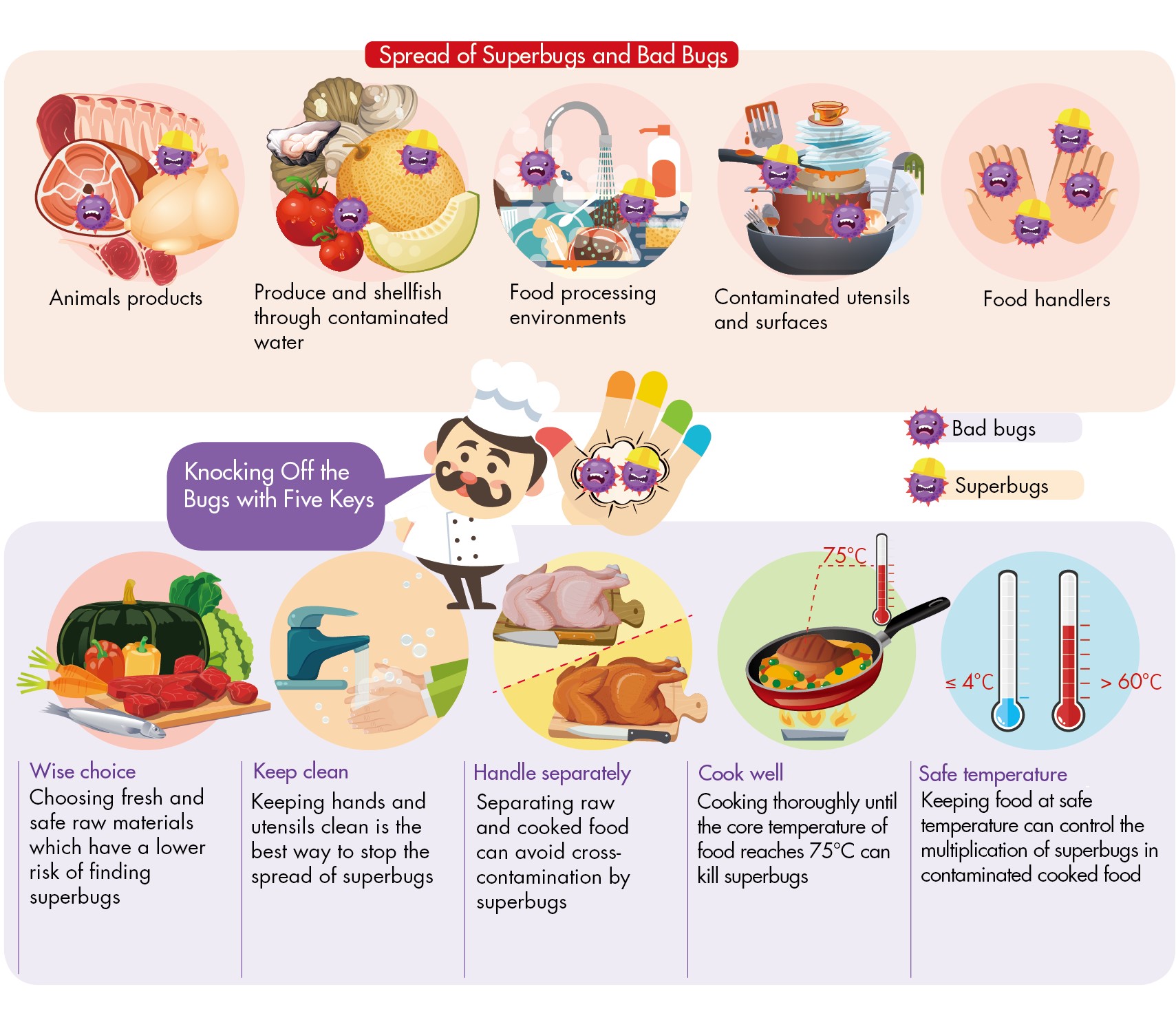 Figure: Combating superbugs and other bad bugs with Five Keys to Food Safety


Knocking Off Superbugs with Five Keys to Food Safety

To combat superbugs and other bad bugs, it is important to practise the Five Keys to Food Safety when handling food in daily life.  Susceptible populations and those who wish to further reduce the risk of foodborne illnesses should avoid consuming raw and undercooked foods which are more likely to carry microorganisms (including superbugs) than thoroughly cooked foods.

Colour, aroma and taste are the three essential elements of Cantonese cuisine.  Seasonal fruits are sometimes added to enhance the colour and taste of dishes.  In this issue, we bring you the “Stir-fried Prawns with Bell Peppers and Mangoes”.  The refreshing taste of mango will whet your appetite.  Mr NG Wai-kwong, Head Chef of Full House Seafood Chinese Restaurant (a signatory of the Food Safety Charter) will show us how this dish is prepared. 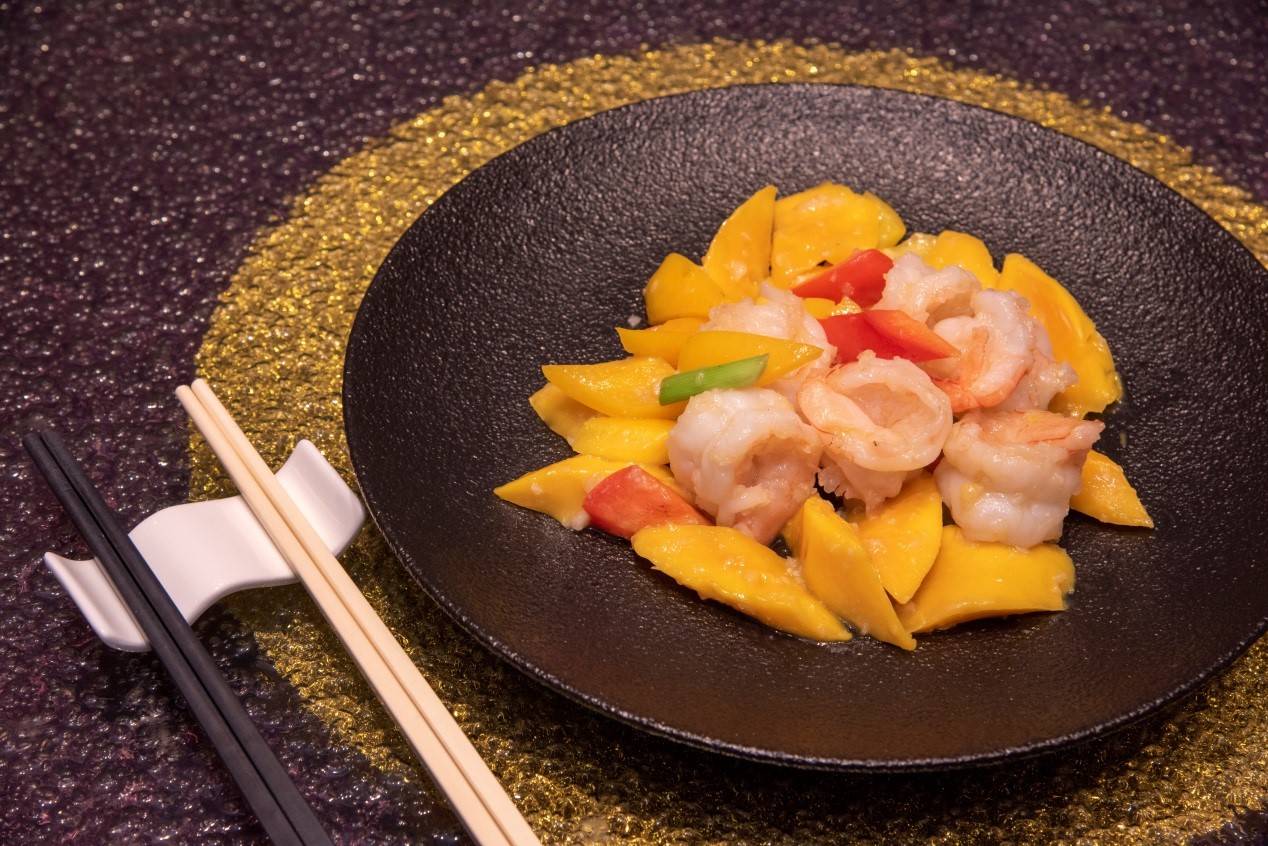 Having been in the culinary industry for more than 30 years, Chef NG Wai-kwong specialises in cooking seafood and making Cantonese dim sum and siu mei.  He shared with us the following tips on the dish Stir-fried Prawns with Bell Peppers and Mangoes: 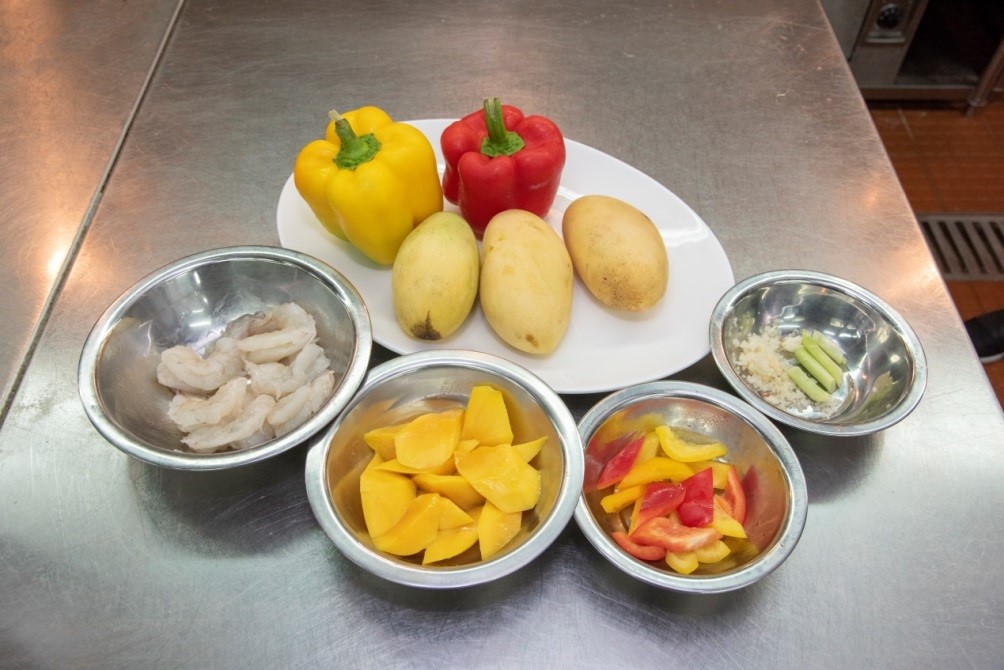 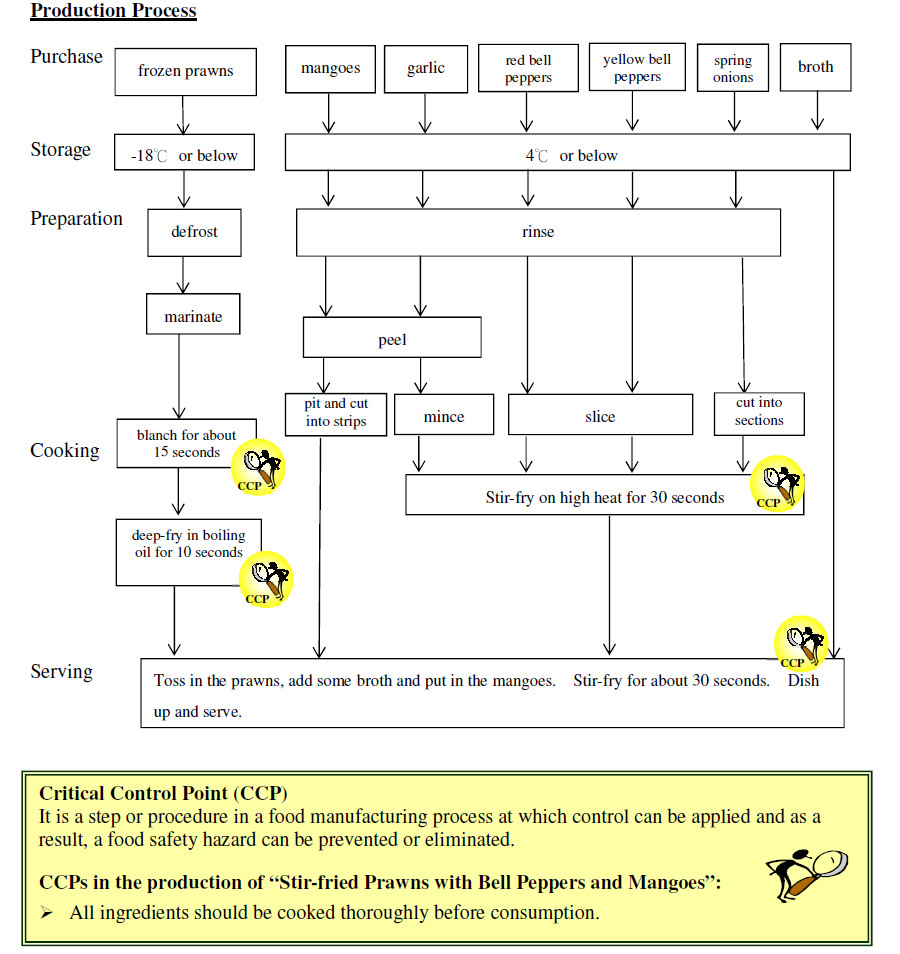 The Centre for Food Safety (CFS) mounts a number of thematic exhibitions in shopping centres of public and private housing estates across the territory every year.  Exhibition boards covering topics such as food safety and nutrition are displayed, and education videos are shown to enhance public knowledge on how to make safe and suitable food choices.  The latest arrangements for the exhibitions will be announced regularly.  For more details, members of the public are welcome to log on to the CFS website through the following link:

For enquiries, please contact the Communication Resource Unit of the CFS on 2381 6096. 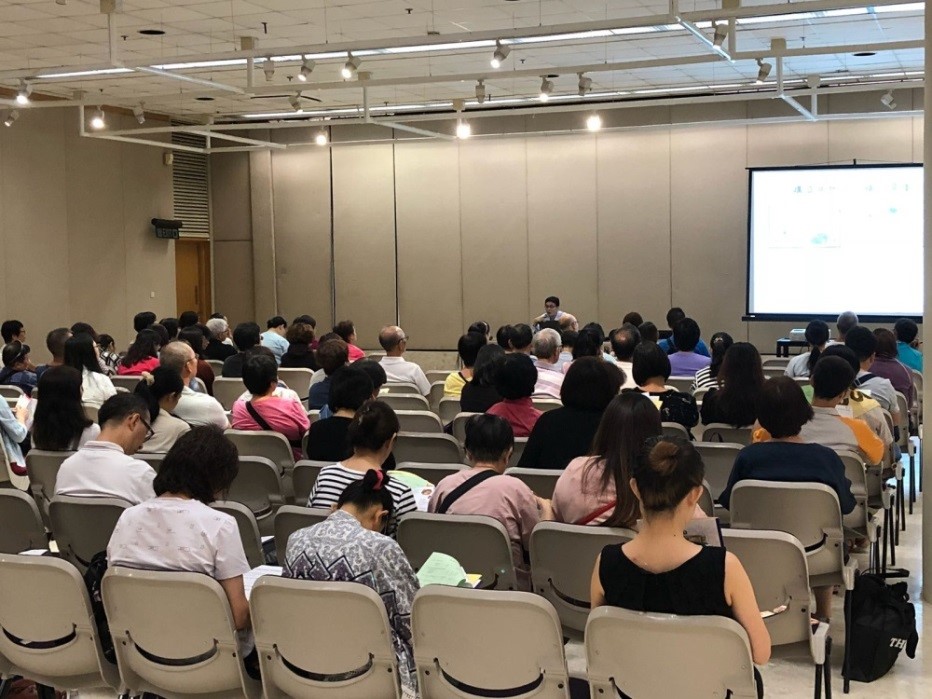 The CFS will organise the Trade Talk and Workshop on HACCP 2019 from March to December 2019 to promote proper food processing procedures among food handlers.  Apart from soliciting the trade's active participation and support in implementing government's initiatives, the CFS will promote the adoption of the HACCP System and the application of the Food Safety Plan in food processing with a view to enhancing food safety.

These seminars will enable the trade to have a better understanding of the principles and operation of the HACCP System and the “5 Keys for Food Safety” advocated by the WHO, namely 1. Choose (choose safe raw materials); 2. Clean (keep hands and utensils clean); 3. Separate (separate raw and cooked food); 4. Cook (cook thoroughly); 5. Safe temperature (keep food at safe temperature), in order to prevent foodborne diseases effectively.  Besides, topics such as the dietary culture of less-salt-and-sugar diet, nutrition labelling and the health implications of trans fat will also be covered.

Food premises will receive invitation letters and enrolment forms listing the dates, time and venues of the Trade Talk and Workshop on HACCP.  Information on the activities will be available at the CFS website (https://www.cfs.gov.hk).  Members of the trade are welcome to visit the website for details.

Food Safety Q&A
Is the mudskipper a toxic fish?

The mudskipper (for example, the Boleophthalmus pectinirostris) is a very common non-toxic fish species which is edible.  However, looks similar to the toxin-containing Yongeichthys criniger and accidental consumption of the latter will cause poisoning.  In March 2007, there was a poisoning incident in Zhanjiang City, Guangdong Province in which one villager died after eating the Yongeichthys criniger. 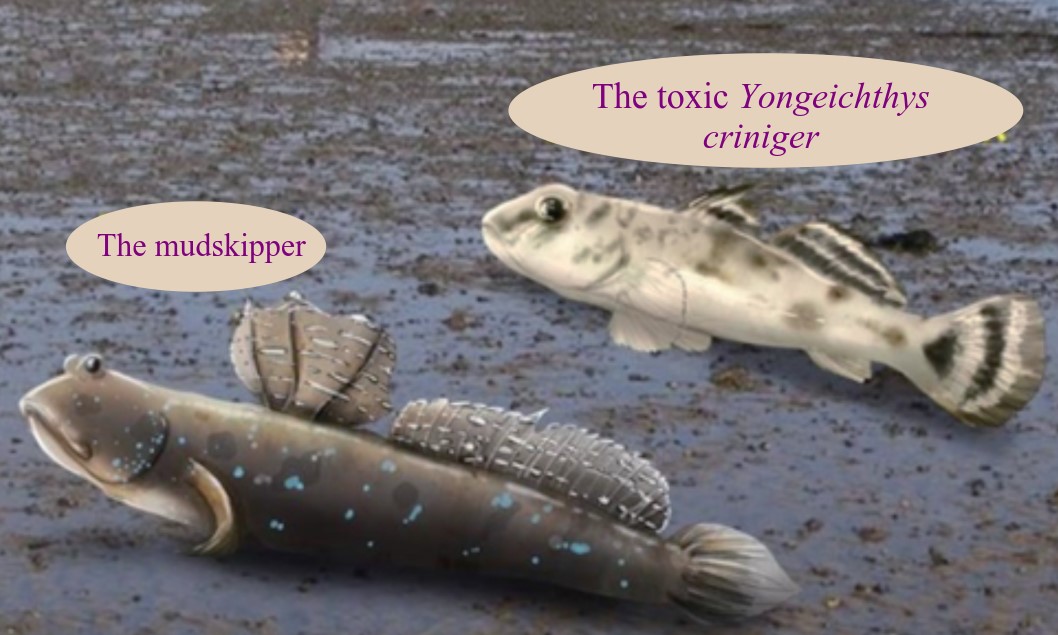 The Yongeichthys criniger contains tetrodotoxin which is a potent marine neurotoxin.  While the lethal dose of tetrodotoxin for humans is around 2mg, the minimum dose necessary to cause poisoning symptoms has been estimated to be 0.2mg.  The symptoms normally develop within 10 to 45 minutes after ingestion, but may be delayed by 3 hours or more.  Victims may experience paraesthesia in the face and extremities, which may be followed by dizziness or numbness, nausea, vomiting, rapid breathing and irregular heart rate.  In extreme cases, the toxin can cause death.  All humans are susceptible to tetrodotoxin poisoning.  Since there are currently no antidotes or antitoxins to the toxin, treatment of symptoms is hence supportive.

Some people catch mudskippers on mudflats for consumption.  Members of the public should beware of the risk of consuming the Yongeichthys criniger which is taken to be the mudskipper.

Advice to the Trade and Consumer

In Hong Kong, any food available for sale on the market must be fit for human consumption.  The trade should exercise particular care when importing and selling fish and fish products and ensure they are safe for consumption.  Consumers are advised to avoid consuming unknown fish.

Truth against Fallacy
Is it healthier to eat more oats?

Oats are a cheap and nutritious cereal crop, frequent consumption of which is effective in reducing the amount of total cholesterol in blood.  That’s why many people take oats in breakfast.  In recent years, however, there have been press reports on the pesticide glyphosate found in oatmeal.  The fact that the International Agency for Research on Cancer has classified glyphosate as a substance “probably carcinogenic to humans” has aroused public concern over the safety of oatmeal products.

The Joint FAO/WHO Meeting on Pesticide Residues, the European Food Safety Authority and other relevant overseas authorities could not establish linkage between glyphosate and cancer in humans at this stage.  To safeguard food safety, the Maximum Residue Limits (MRLs) of glyphosate have been set as one of the measures to regulate levels of glyphosate and other herbicides in foods worldwide, including Hong Kong. 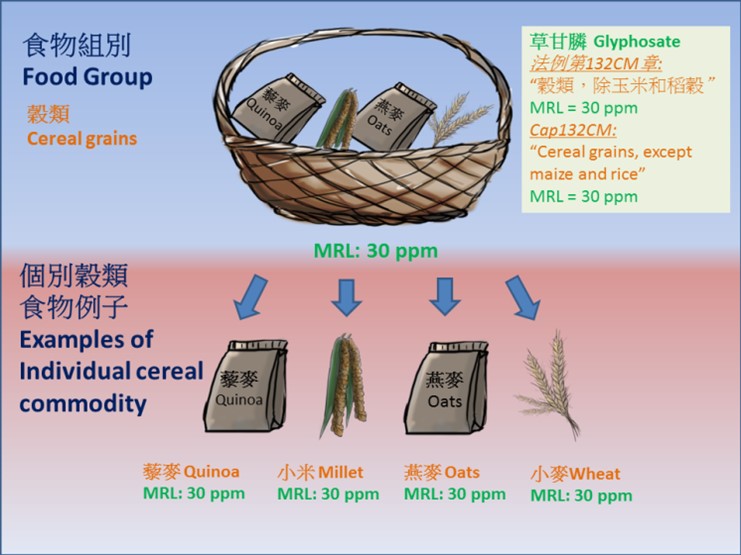 Under the Pesticide Residues in Food Regulation (Cap. 132CM), the MRL of glyphosate in oats is 30 mg/kg, which is the same limit adopted by the Codex

The CFS has been collecting oatmeal samples under the food surveillance programme for testing glyphosate.  All test results were satisfactory.  There is no health concern over usual consumption of oatmeal products by the general public.

Fill in the blanks