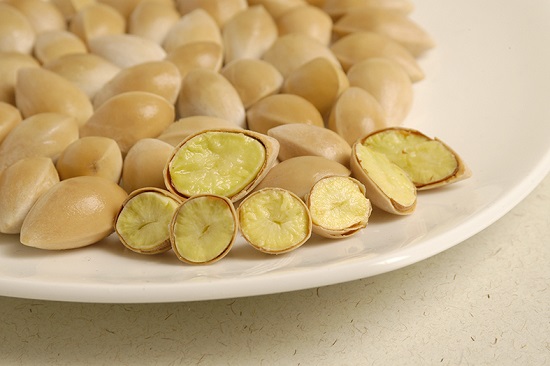 Of over 300 000 known plant species in the world, at least 2 000 are considered to be poisonous, with some being common food plants. Unlike man-made chemicals such as pesticides and environmental pollutants or foreign substances which get into our food supply, natural toxins are found inherently in food plants. Consuming such plants in sufficient amount or without proper processing can be potentially harmful to health and may cause food poisoning. The amount and the distribution of toxins present in a plant vary, depending on the species as well as the geographical conditions where it grows.

Common classes of plant toxins include alkaloids (such as pyrrolizidine alkaloids and glycoalkaloids), cyanogenic glycosides, lectins, saponins, and antinutrients. Some of these toxins will be discussed below.

Lectins are found in many types of beans, among which red kidney beans have the highest concentrations. Consumption of these toxin-containing beans which are uncooked or undercooked may cause food poisoning within a short time and victims may suffer from symptoms like nausea, vomiting and diarrhoea. Nevertheless, these toxic substances can be destroyed by soaking the beans well and cooking them thoroughly in boiling water. As canned beans have been thoroughly processed at high temperature, they are safe to consume without further cooking. 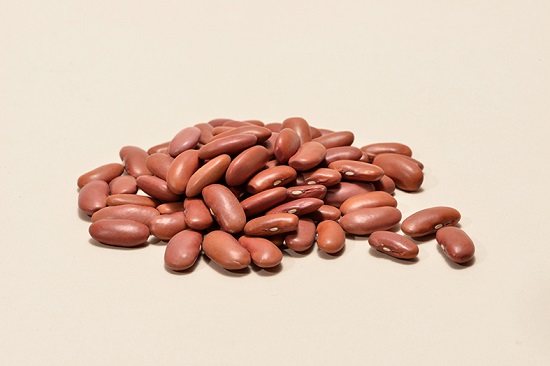 Trypsin inhibitors are a type of anti-nutritional factors that can inhibit the activities of some digestive enzymes in human intestines and hinder our dietary intake of nutrients. Soya beans contain trypsin inhibitors. Nonetheless, trypsin inhibitors can be destroyed by soaking the soya beans well and cooking them thoroughly in boiling water.

All members of the Solanacea family (e.g. potatoes) produce glycoalkaloid toxins. The levels of these toxins in fresh potatoes are usually low and do not pose adverse effects to humans. However, levels of glycoalkaloids may substantially increase in potatoes that show signs of sprouting, greening, physical damage or rotting, making the potatoes taste bitter. Not readily soluble in water and rather heat stable, these toxins cannot be destroyed by cooking. Symptoms of glycoalkaloid poisoning include a burning sensation in the mouth or severe stomach ache, nausea and vomiting.

In general, the adverse health effects posed by toxins are subject to the concentrations, amount of intake and susceptibility of the individual. The public is advised to take measures for reducing risk prior to consumption of food plants containing natural toxins (see table), and not to pick and eat wild plants. Children, the elderly and individuals with poor health conditions should pay particular attention. Moreover, the public should follow the conventional ways of food processing that are known to be safe, and maintain a balanced diet. 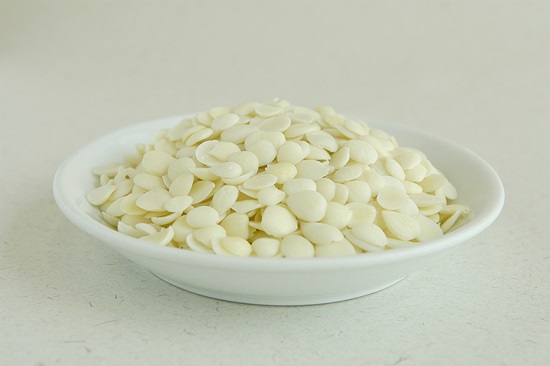 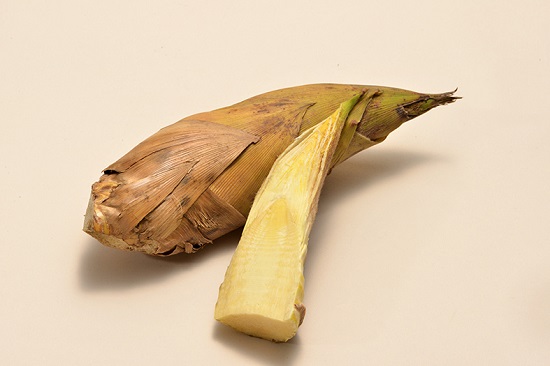 Taste Misleads - Watch out for Salt and Sugar in Sauces

In Hong Kong, many people have a sauce tooth. They favour adding a large amount of sauces at the dining table, and matching different sauces with various dishes for all three meals every day. Imagine one starts the day with steamed rice-rolls with sweet sauce and sesame sauce for breakfast, followed by French fries with ketchup at fast food shop for lunch, then for dinner, siu mei and boiled vegetables with seafood sauce, chilli sauce and oyster sauce, not to mention that many others like to mix rice with sauces. In fact, what effects will sauces bring to our health?

According to the World Health Organization (WHO), salt added during cooking or at the table is the major sodium source in traditional diets in Asia. In Hong Kong, condiments, sauces and soups are the major contributors to sodium. While sodium is essential for normal body functions, excessive sodium intake may result in increased risk of developing hypertension, and other related diseases such as coronary heart disease and stroke.

Apart from this, sauces are hidden sugar traps. Take ketchup as an example. During the production of such sauce with a sour flavour, a large amount of sugar has to be added to make it less sour. While sugar provides energy for the body, consuming too much of it may lead to excessive energy intake, which may result in overweight and obesity, and in turn increase the risk of other chronic non-communicable diseases (NCDs) including cardiovascular diseases and diabetes. Frequent intake of sugar may also increase the risk of dental caries.

To reduce the intake of sodium and sugar, the public is advised to maintain a balanced and varied diet and limit the consumption of foods with high amount of added salt and sugar. The trade is advised to take reference to the "Trade Guidelines for Reducing Sodium in Foods" and "Trade Guidelines for Reducing Sugars and Fats in Foods" in producing and promoting wholesome and safe products. 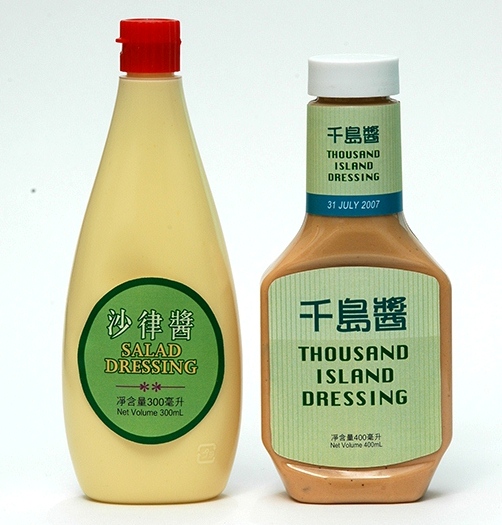 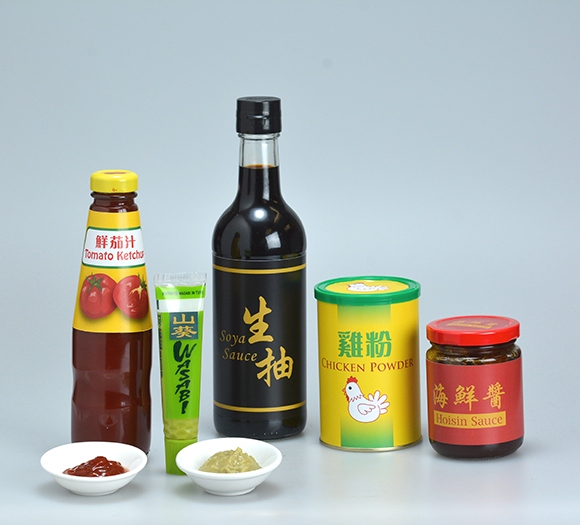 Safety Tips for Preparation of Salads

Salads have always been popular among consumers. Generally speaking, most ingredients for salads are uncooked. Some of these ingredients, such as fresh vegetables and fruits, may get contaminated if they come into contact with harmful microorganisms (e.g. Listeria monocytogenes, Salmonella, etc.) that are present in soil, water or animal faeces. Besides, the preparation of salads normally requires a lot of manual handling, during which the salads may become contaminated with Staphylococcus aureus that may be present on human skin. Time-temperature abuse during the preparation and storage of salads also increases the risk of food safety.

To ensure food safety, special attention should be paid to the following measures when preparing salads:

Susceptible populations (including pregnant women, the elderly and immunocompromised individuals) should pay special attention to the following advice: 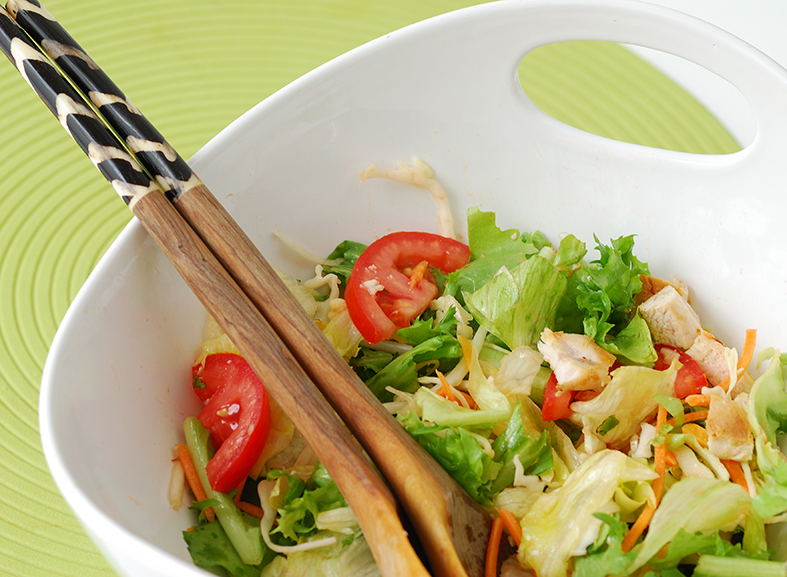 To promote the concept of healthy diets with less sugar and salt, we are very honoured to have invited Chef LO Hau-chi of "Gingko House", a signatory of the Food Safety Charter and a social enterprise dedicated to employing the retired elderly, to demonstrate how to prepare the dish "Stuffed Gluten Puffs with Pumpkin Sauce" in this issue. 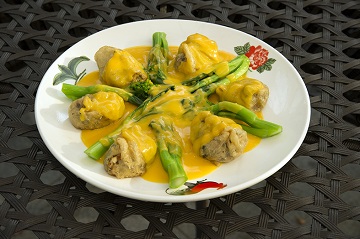 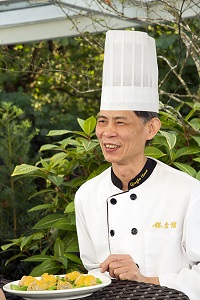 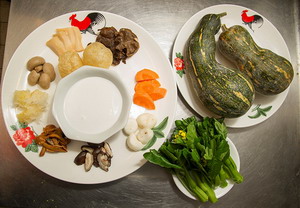 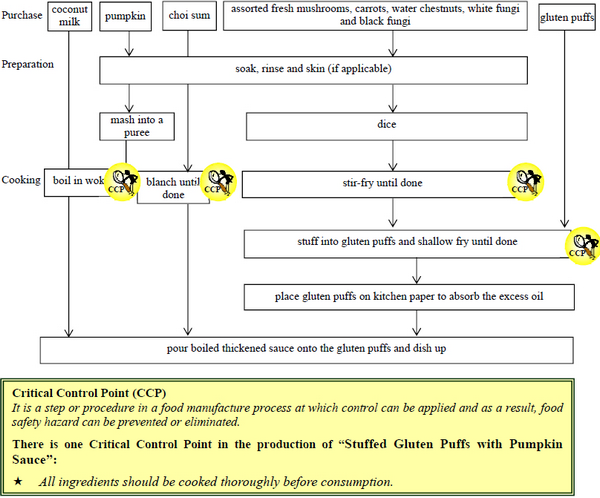 To promote knowledge of food safety among the public and the food trade, the Centre for Food Safety (CFS) regularly holds thematic exhibitions in public housing estates and major shopping centres. The topics covered in the exhibitions scheduled for 2015 include nutrition labelling, 5 Keys to Food Safety, organic food, genetically modified food, natural toxins and veterinary drug residues. In addition to the exhibition panels, educational videos will be shown at the venues and visitors will be invited to play interactive games.

Please visit the CFS's website (www.cfs.gov.hk) for regular updates on the arrangements for the exhibitions. For enquiries, please contact the Communication Resource Unit on 2381 6096.

The CFS organises Food Safety Day every year to promote food safety messages to the public and the food trade. Food Safety 2015 will be held on 26 June (Friday) at Chiang Chen Studio Theatre of The Hong Kong Polytechnic University. The event will kick-start a series of activities in the year. Under the theme of "Hong Kong's Action on Salt and Sugar Reduction", Food Safety Day 2015 aims to enlighten the public on the importance of reducing dietary salt and sugar. The event will cover a series of talks for members of the public and the trade. Information on the talks will be uploaded to the CFS's website. Active participation by all sectors is welcome.

The Award Presentation Ceremony for the Salt and Sugar Reduction and Nutrition Labelling Video Competition, co-organised by the CFS and the Education Bureau and supported by the Committee on Home-School Co-operation, will also be held on that day. The objective of the Competition is to show the "how and why" of reducing dietary salt and sugar and how to apply nutrition labelling to reduce salt and sugar intake in daily lives so as to help participants in developing a healthy eating habit.

Since March 2014, cases and deaths of Ebola virus infection have been continuously reported in West Africa. Given the rapid spreading of Ebola epidemic and its high fatalities, and that Ebola virus has been detected in animals, there are concerns over the risk of contracting the virus through consumption of poultry, livestock and their products.

Will one be infected with EVD by consumption of poultry, livestock and their products? Generally speaking, Ebola virus is not foodborne. Thorough cooking of food products to a core temperature of at least 70ºC can inactivate Ebola virus. The WHO therefore advises that it is safe to consume food products that are properly prepared and cooked. However, it is important to observe general principles for good hygiene when preparing raw meat and animal products. Hands should be washed thoroughly before and after handling raw meat and other products of animal origin, such as offals, bones, blood, etc. Working surfaces, utensils and equipment that have been in contact with the above products should also be cleaned thoroughly before and after use. 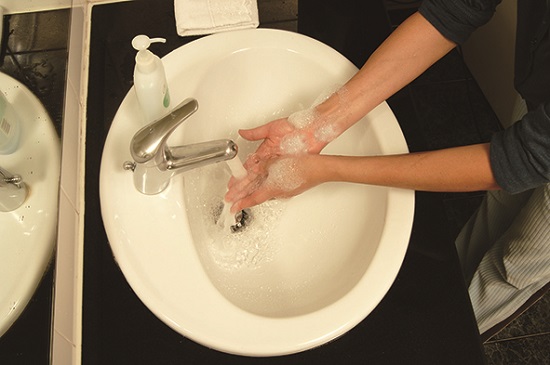 What is organic food?

Organic food usually refers to food that is produced according to organic standards throughout the production, handling, processing and marketing stages, and certified by a certification body or authority of the country of origin. When it comes to organic agriculture, chemical pesticides and chemical fertilisers are refrained from use in crop production. As for animal farming, the use of antibiotics and growth hormones is avoided, and no genetic modification and irradiation are applied. Alternatively, organic agriculture relies on crop rotation, composting and biological pest control to maintain soil productivity, supply nutrients to the plants, as well as to control weeds, insects and other pests. 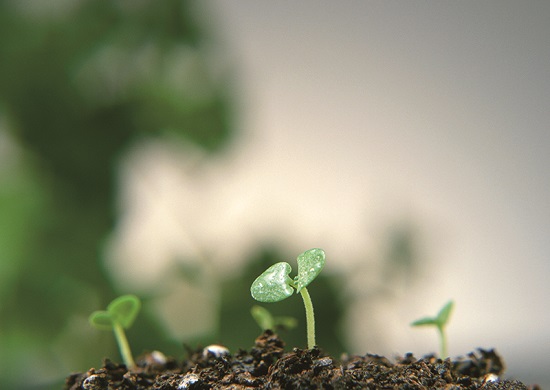 Organic food is generally sold at higher prices. However, is its nutritional value proportional to its price? A review commissioned by the Food Standards Agency of the United Kingdom showed that organically and conventionally produced crops and livestock products are broadly comparable in their nutrient contents, and there is currently no evidence suggesting any additional nutritional benefit in organic food. Two other independent reviews conducted by the French and Swedish food safety authorities also share similar views on the nutritional value of organic food.

In spite of this, without the use of products like chemical pesticides, herbicides and veterinary drugs in organic farming, concentrations of synthetic chemical residues in organic food can be reduced.

We should be mindful that since synthetic fungicides are not applied in organic farming, organic produce may be more susceptible to fungal infection and hence mycotoxins may be produced. Also, organic agriculture uses composted manures as fertilisers. The produce and nearby water source may be contaminated with pathogens if the manures have not been properly composted. Compared with food produce having undergone decontamination by means such as irradiation and synthetic disinfectants, which are prohibited in organic production, fresh organic produce may carry a higher microbial load. That said, there is currently no sufficient evidence that organic food is less safe than food produced by conventional means. Mycotoxins and pathogenic microorganisms may be present in both organic and conventional production systems.

On the basis of the scientific evidence available to date, there are no significant differences in nutritional value and safety between organic food and conventional food. When purchasing organic food products, just the same as choosing their conventional counterparts, one should avoid products that appear unfresh, mouldy or shrivelled. Food should be washed and cooked before consumption. Most importantly, one should maintain a balanced and varied diet for a wide spectrum of nutrients to keep healthy. 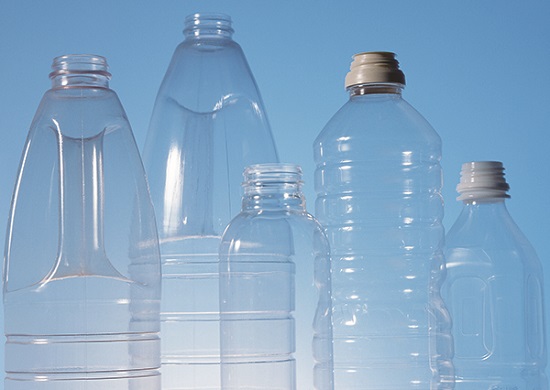 Plastic materials are frequently used in food packaging and containers. How much do you know about the heat resistance of various types of plastic materials?

Printed copies of the Food Safety Bulletin can be obtained from the Communication Resource Unit located at 8/F, Fa Yuen Street Municipal Services Building, 123A Fa Yuen Street, Mong Kok, Kowloon. For enquiry, please call 2381 6096. The public may also visit the website of the CFS (www.cfs.gov.hk) for the online version.