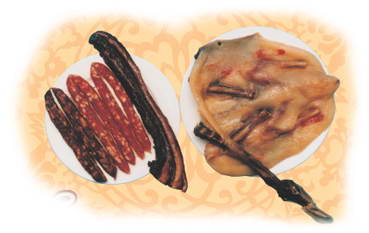 The howling moonsoon and cold weather remind us of the Chinese delicacy "lap-mei". In many Chinese restaurants, "lap-mei" dishes are now back to the centre stage. "Lap-mei", with its characteristic aroma, often whets our appetite. But how much do you know about "lap-mei"?

The method of meat curing has been employed since ancient times. In ancient China, "lap" means "sacrificial rites" and very often surplus meat after the rites would be cured and stored for consumption in times of scarcity. In the old days, it was a tradition to cure meat in the twelfth month of the lunar year which served as a delicacy to cerebrate the Spring Festival. With the invention of refrigerating equipment, curing as a way to preserve meat has lost its lustre. Nevertheless, the unique texture and distinct flavor of traditionally cured meat continue to charm modern people as an important alternative of fresh meat.

The manufacturing process of "lap-mei"

Raw materials like pork, duck and duck liver must be cleansed and sliced before the curing ingredients such as salt, sugar, wine and nitrates or nitrites are added. The mixture is then placed in chillers to allow thorough distribution of curing ingredients. The meat is then dried. In the past, the meat was often air-dried. However, the traditional air-drying process requires ample space for hanging and loading, not to mention the unpredictable climate and the long duration required. Today, the trade largely prefers the method of hot air-drying and the meat is put in an air-conditioned chamber at a temperature ranging between 35oC and 40oC to allow a more rapid vaporization of moisture. Take the preserved Chinese sausages as an example, the whole drying process can be completed in 3 to 4 days.

Why are nitrates or nitrites added?

Nitrates or nitrites have a unique place in meat curing. They can enhance food safety because of their anti-microbial property especially on Clostridium botulinum and the inhibition of toxin production.

Clostridium botulinum is a gram-positive, spore-forming, anaerobic rod that can cause fatal infection. It is known to exist in anaerobic conditions. Therefore, vacuum-packaged food such as bacon and canned processed meat can support growth and toxin production by Clostridium botulinum strains without causing noticeable smell. In preserved meat especially meat sausages, spores of the bacteria can germinate, grow and produce toxin if the temperature is not properly controlled. Besides, Clostridium botulinum can also grow in food with high water content.

Nitrates or nitrites also have other important functions. Firstly, they render the cured meat red-pinkish in colour by stabilizing the haem in myoglobin through the formation of nitrosomyoglobin. Secondly, they can delay the process of oxidative rancidity of meat and, hence, prevent the development of a rancid smell resulting from prolonged storage.

Health Effects of Nitrate and Nitrite

Nitrate per se has a relatively low toxicity, whereas nitrite has a more significant effect on the human body. Nitrates at levels commonly present in food are not toxic to human However, they can be converted into nitrites by the intestinal bacteria in human body.

Consumers should adopt the following advices on purchasing, consuming, cooking and storing "lap-mei":

The articles of food which may contain preservative and the nature and proportion of preservative in each case are stipulated in the First Schedule to the Preservatives in Food Regulations made under Section 55 of the Public Health and Municipal Services Ordinance (Cap 132). As far as "lap-mei" and preserved Chinese sausages are concerned, the permitted preservatives include nitrate and nitrite, and their proportions must not exceed 500 and 200 parts per million respectively. Any person who contravenes the ordinance shall be liable to a fine of $50,000 and to imprisonment for 6 months. 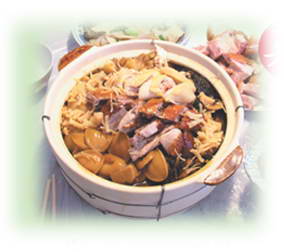 In recent years, enjoying a steaming hot "poon choi" with family members or friends has gained popularity particularly at times of traditional festivals. The large assortment of food contained in a pot of "poon choi" guarantees that there are favourite foods for each person. Many restaurants are offering "poon choi" with various recipes. Simply place an order with one of the restaurants, and you can enjoy the delicacies with friends and relatives.

From a food hygiene perspective, "poon choi", which comprises of different kinds of foods, is in general more complicated to prepare and cook than a single dish. When preparing "poon choi", the trade should note the following key points: 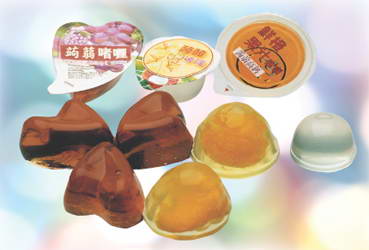 Lying lazily under the sun with an appetizing dessert in the holidays is truly pleasurable. However, many city dwellers are now preoccupied with the idea of "slimness". To cater for the needs of these consumers, food manufacturers have replaced sugars with sweeteners in their products like soft drinks, candies, chewing gum and dessert. Sweeteners may soon become a new "sweetheart" on dinning table, threatening the dominance of cane sugar. 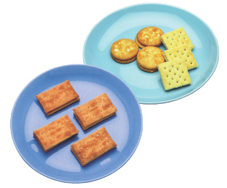 There are two categories of sweeteners, namely naturally occurring sweetening agents and synthetic compounds. They are either extracted naturally from plants or chemically synthesized. Some sweeteners are tens of times more sweet than cane sugar and only a small quantity of them will suffice to sweeten food, but the calories they entail are much lower than that of cane sugar. Since these sweeteners have lower calories and do not affect the levels of insulin or blood glucose, they are ideal alternatives for diabetics or people who want to lose weight. 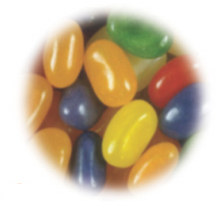 Like all the other food additives, sweeteners have to undergo stringent safety assessments before they are permitted for use in food. The Joi nt Food and Agriculture Organization / World Health Organization Expert Committee on Food Additives (JECFA) evaluates the safety of sweeteners based on toxicological data from animal and human studies and recommends a list of sweeteners for human consumption. In normal circumstances, these sweeteners will not pose any harmful effects to humans, in particular, they are not harmful to growing fetus and do not induce cancers.

According to the Sweeteners in Food Regulations made under the Public Health and Municipal Services Ordinance (Cap. 132), eight groups of sweeteners are permitted for use in Hong Kong . Any person who uses non-permitted sweeteners in any food shall be guilty of an offence and shall be liable of conviction to a maximum fine of $50,000 and imprisonment for 6 months. 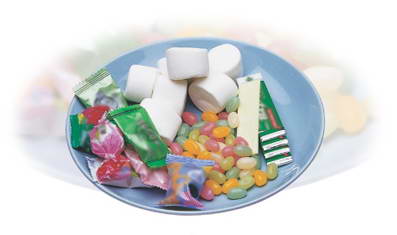 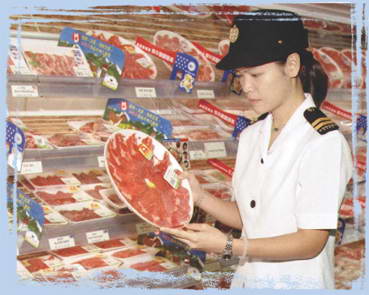 Taiwan media reported earlier that the low-priced steaks offered by a number of local chain steakhouses were fabricated from "restructured/reconstituted beef". As a result of the wide media coverage, some of these restaurants ceased offering these kinds of beef product. But the decision was made purely on commercial ground rather than on food safety ground. In fact, fabricated steaks are not new. Resembling ordinary steak in appearance, yet cheaper in price, they are embraced by customers and have been in common existence in overseas countries. 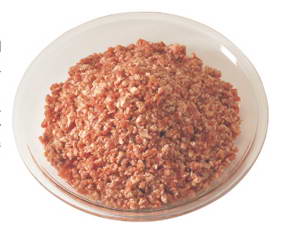 What is fabricated beef? 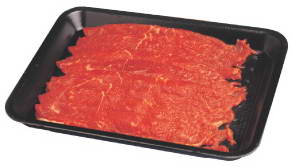 How do I know if a steak is fabricated or natural?

What is the risk of consuming fabricated steaks?

During slaughtering, the surface of beef may be contaminated by bacteria like Esherichia coli O157:H7. Since the fabrication of steaks involved chopping/mincing of beef, the bacteria on the surface may find its way into the core of the steak. The more the processing, the greater the chance of contamination. Moreover, as many people are in favour of half-cooked steak, it is likely that the bacteria inside cannot be eradicated. Therefore, fabricated steak must be thoroughly cooked before consumption.

What are the points to note when purchasing, handling and consuming fabricated steak?